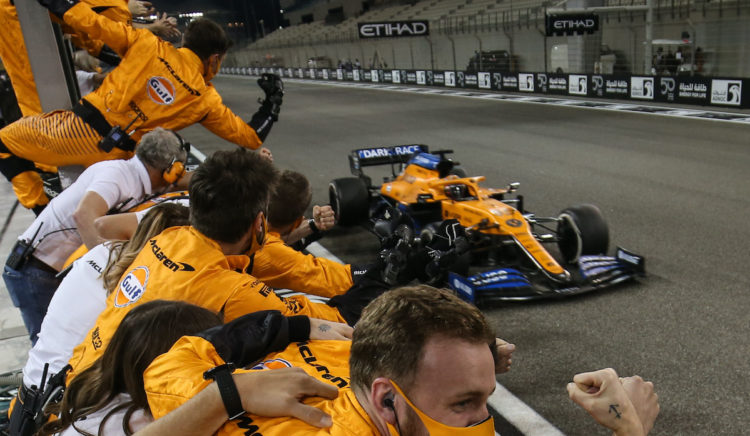 McLaren’s Carlos Sainz has been cleared of any wrongdoing by the Abu Dhabi Grand Prix stewards, meaning he keeps his sixth place finish, helping to secure third place in the Constructors’ Championship for the British team.

Sainz, in his last race for McLaren ahead of a move to Ferrari for 2021 to replace Sebastian Vettel, was called into the pits during a Safety Car period and was investigated for “driving unnecessarily slowly”, to avoid having to wait for team-mate Lando Norris who pitted moments earlier.

The stewards chose to investigate the incident after the race, meaning McLaren were at risk of losing third in the Constructors’ Championship if the stewards opted to impose a time penalty equal to a drive-through.

After speaking to Sainz and reviewing the telemetry from the Spaniard’s car, the stewards classed it as a “racing incident”, opting to take no further action.

Sainz therefore retains his sixth place, one position behind team-mate Norris, handing McLaren a haul of 18 points to give them a slender advantage of just seven points over Racing Point, which suffered a DNF on Sergio Perez’s car, whilst Lance Stroll finished tenth.

In the stewards report, they explained how they came to their decision: “We are not of the view that this action in any way resulted in the Team avoiding a “double stack” situation as Car 4 (Norris) was well clear of the Pit Stop at this time.

“We also accept the explanation of the driver of Car 55 that he was exercising a degree of caution as video evidence confirms the presence of a lot of other teams’ personnel in the Pit Lane at the time.

“Car 18 (Stroll) was able to maintain a speed of 80 km/h in the Pit Lane except for a very short period of time (approximately 1 second) and therefore we do not consider that it was materially impacted by the actions of the driver of Car 55.

“We also checked the relative speeds of the cars after leaving their pit stops and can see no evidence of Car 55 driving unnecessarily slowly.”