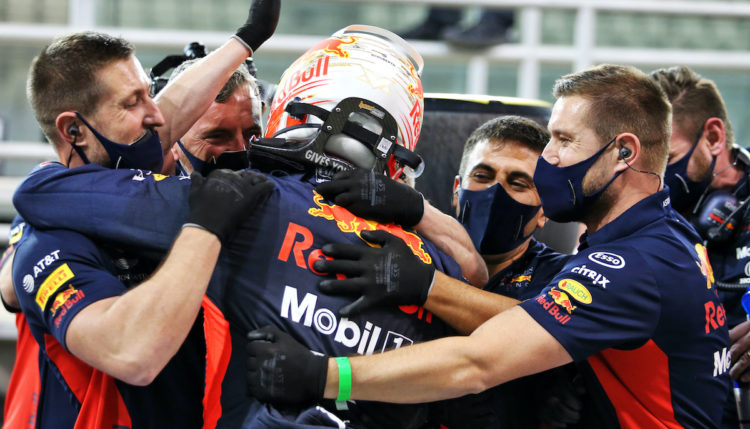 Red Bull will be contenders in 2021

In a tightly-contested Q3 session beneath the lights at Yas Marina Verstappen finished a close second to Valtteri Bottas through the opening runs, underlying the pace he and Red Bull displayed during practice.

Returning World Champion Lewis Hamilton grabbed the initiative but Bottas responded – only for Verstappen to go even faster.

Verstappen’s time of 1:35.246s left him a mere 0.025s clear of Bottas, with Hamilton less than a tenth down on the Dutchman.

It marked the first – and only – pole position of 2020 from a non-Mercedes-powered car.

Lando Norris, running a relatively fresh engine after taking new components in Bahrain, put in a stellar lap late on to take fourth, just over two-tenths down on Verstappen.

Verstappen’s team-mate Alexander Albon thrust himself into contention for top spot through the first runs but then failed to improve, dropping to fifth, behind the standout Norris.

Carlos Sainz underlined McLaren’s pace by taking sixth while Daniil Kvyat qualified seventh for what is set to be his final outing in AlphaTauri colours.

Lance Stroll was eighth for Racing Point while team-mate Sergio Perez opted out of representative efforts in Q2 due to his back-of-the-grid penalty for taking fresh engine parts.

Charles Leclerc was ninth but will drop to 12th spot on the grid due to his penalty for colliding with Perez in Bahrain.

Pierre Gasly rounded out the top 10 for AlphaTauri.

Renault knocked out in Q2

Renault finished an encouraging third and fourth in Saturday’s final practice session but was unable to replicate that form in qualifying.

Esteban Ocon managed only 11th while Daniel Ricciardo, who had his first push lap deleted for track limits, was down in 12th spot.

Sebastian Vettel was 13th in his final qualifying session with Ferrari, meaning he ended the season with 13 straight failures to make Q3, mustering higher than 10th on the grid just once all year.

Antonio Giovinazzi had his first Q1 lap erased for exceeding track limits but vaulted to 15th as the chequered flag flew, ensuring he made it through to Q2, at the expense of Alfa Romeo team-mate Kimi Raikkonen.

Raikkonen took 16th, ahead of outgoing Haas driver Kevin Magnussen, with George Russell going from front-row to 18th in the space of seven days after returning to Williams.

Pietro Fittipaldi took 19th as Nicholas Latifi finished at the rear following a spin as he began his final push lap.

Perez and Magnussen will nonetheless drop to the back row of the grid after both taking on new engine components.