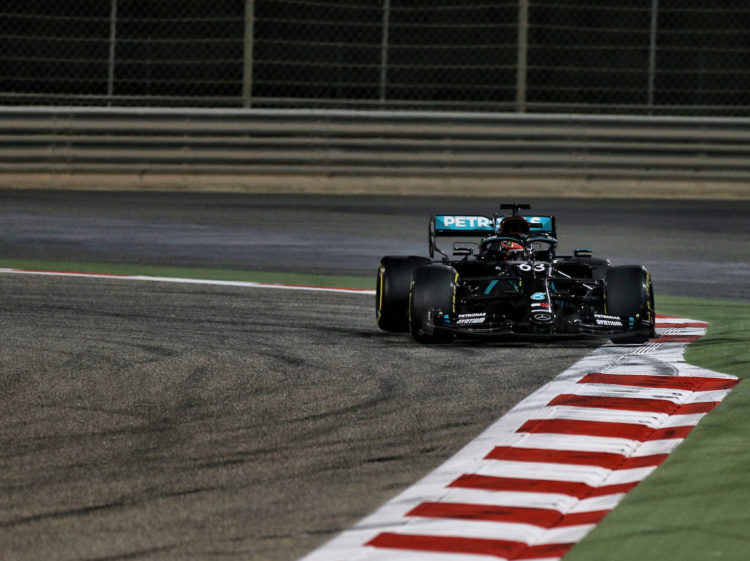 George Russell has retained his maiden Formula 1 Championship points after Mercedes was fined €20,000 for the incorrect use of tyres on his car during the Sakhir Grand Prix.

During a pit stop for both Russell and team-mate Valtteri Bottas under a Safety Car, a radio failure within the Mercedes garage caused confusion during the sequence.

Russell was fitted with part of Bottas’ allocation, and as a result had to return to the pits once again on the following lap to correct the situation.

The FIA outlined that such an offence would normally result in disqualification, however it took into account a number of circumstances when applying the penalty, including the radio failure and Mercedes’ rapid response to rectify the error.

“As described in the latter’s report (document 34) Car 63 was fitted with front tyres that were allocated to Car 77.

“This was caused by a radio communications technical issue wherein the pit wall’s communication to the pit crew that Car 63 was entering the pits prior to (and not after) Car 77, failed to be received by the crew of Car 63 because at the same time, the driver of Car 63 transmitted over the top of that message.

“This resulted in the front tyres of Car 77 accidentally going onto Car 63. (The cars were ‘double stacked’ at the time.)

“This is clearly a breach of the regulations and would normally involve a sporting penalty up to Disqualification. However, in this case there are mitigating circumstances, additional to the radio issue referred to above.”

“Firstly, the team rectified the problem within 1 lap. This involved Car 63 making another pit stop, thus dropping it further down the classification.

“Secondly, Car 77 made a pit stop to change tyres only to find that the front tyres to be fitted to it, were on Car 63, so was sent out after considerable delay, with the tyres that were on Car 77 prior to the pit stop. This also impacted the final classification of Car 77.

“Thirdly, although this type of infringement is not catered for under the ‘3 lap tolerance’ referred to in the second paragraph of Article 24.4 b) (which currently only refers to the use of tyres of differing specifications), we consider it to be similar in nature.

“However, the responsibility to fit tyres in compliance with the regulations, still rests with any team and thus a penalty is considered as being required.

Russell ended the race in ninth place, having had to pit again in the latter stages of the race with a slow rear puncture. He scored three World Championship points, as he also bagged the fastest lap of the grand prix.