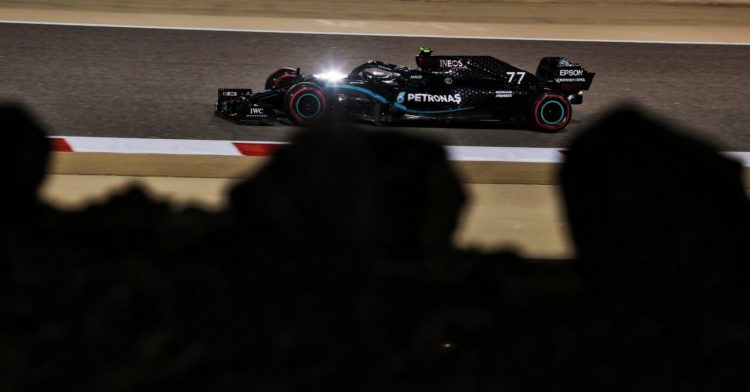 With Formula 1 utilising the short Outer Layout of the Bahrain International Circuit drivers were afforded several runs throughout qualifying.

Mercedes adopted a three-run tactic in Q3, rather than the usual pair of push laps, and Russell almost claimed a shock pole with his last effort.

Ferrari has lacked pace for much of the year and during practice the SF1000, which has struggled for straight-line speed, was again off the pace, with Charles Leclerc outside of the top 10.

But in qualifying he sprung a surprise as he took fourth overall, within three-tenths of pole position, to join Verstappen on the second row of the grid.

Sergio Perez continued his strong run of form by taking fifth for Racing Point while Daniil Kvyat – set to lose his AlphaTauri seat after 2020 – was a fine sixth.

Albon drops out in Q2

Alexander Albon was only 0.379s down on team-mate Verstappen in Q2 but around the rapid Sakhir lap it proved the difference between being fastest in the session and being 12th.

It was also a disappointing session for Renault’s Esteban Ocon.

Ocon had been towards the sharp end of the pack through practice but failed to secure a Q3 spot and will start only 11th.

Sebastian Vettel’s difficult season with Ferrari continued as he took only 13th, while Antonio Giovinazzi comfortably saw off his usual competitors to take 14th for Alfa Romeo.

Lando Norris had a poor session, accepting he mis-timed his Q2 run, and finished 15th.

Usual group at the back

Kevin Magnussen fronted Haas’ charge in the absence of Romain Grosjean and came a tenth away from making Q2, ahead of Williams duo Nicholas Latifi and Jack Aitken.

Latifi, having been whitewashed by Russell, finished a tenth clear of Aitken, who avoided finishing at the bottom of the pack.

Aitken managed to clear Alfa Romeo’s Kimi Raikkonen, who was some way off team-mate Giovinazzi, while fellow debutant Pietro Fittipaldi was at the back.