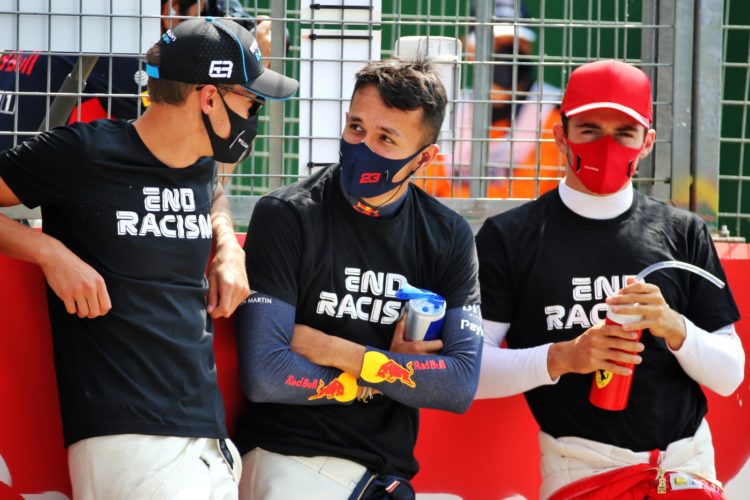 George Russell’s contemporaries quipped that he should be in contention for pole position and victory when he steps up to Mercedes at this weekend’s Sakhir Grand Prix.

Russell has replaced Lewis Hamilton at Mercedes in the wake of the World Champion testing positive for Covid-19.

Russell competed with several of his Formula 1 contemporaries in junior categories and a group, involving Charles Leclerc, Lando Norris and Alexander Albon, spent time gaming – and streaming their efforts on Twitch – during the lockdown earlier this year.

Leclerc has won races and taken poles in Formula 1, Norris and Albon have finished on the podium, but Williams regular Russell has yet to score a point since making his debut alongside the McLaren and Red Bull drivers in 2019.

Russell has stressed that he has not set any expectations for his Mercedes debut but his rivals say they are anticipating he will be at the sharp end of the pack.

“For George, it’s an amazing opportunity, I’ve known him for a lot of years,” said Leclerc.

“We were team-mates, me, Alex and George back in 2011 in karting. Now he finally has the opportunity to race for a top team, I don’t know for how long, if it’s only one weekend or two.

“I think he will show how much of a good driver he is this weekend. For me, [I’d expect] a podium at least, but I have some hopes of a win. It’s very optimistic, but I know he is very good. I would bet on a win.”

“We’re good mates, get along well, and it’s nice to see a mate get a top seat like that,” said Norris.

“He has big boots to fill, from a seven-time world champion, I wish him all the best, it’ll be a big challenge for him.

“I think if there’s any weekend Mercedes maybe have a smaller advantage than any other weekend it’s probably here, so he’s taken a step up into the team at probably one of the toughest weekends of the year in terms of their advantage they have.

“It’s not going to be easy for him but I know how good of a driver he is, I’m sure everyone else does, and of course Mercedes do. I’m expecting big things.”

Albon added that “I’m excited for him. I think he will show everyone what he can do. “Obviously, it’s exciting for the younger generation I guess and I have no doubts he’s going to do a good job.”