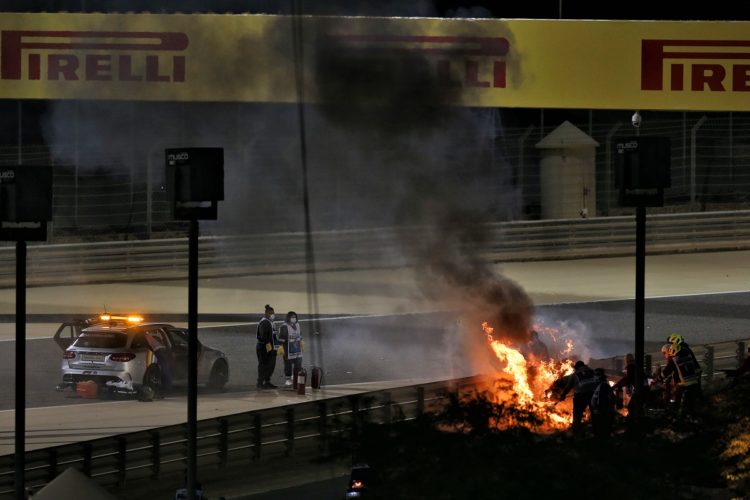 Two civil defence personnel that were involved in the rescue of Romain Grosjean will be rewarded with promotions, the Bahrain Crown Prince Salman bin Hamad Al Khalifa has ordered.

Grosjean suffered a sizeable crash during the opening lap of last Sunday’s Bahrain Grand Prix, which saw his car erupt in flames as it pierced the barriers and split in half after striking the Armco barrier at 227 km/h.

A fire marshal immediately ran to the car and began to spray the fire extinguisher in hand, while the FIA doctor Ian Roberts helped Grosjean away from the wreckage as it continued to burn.

The crash overshadowed the remainder of the race, however Grosjean only suffered minor burns to the back of his hands and is expected to be released from hospital on Tuesday.

As a result of the work from two particular individuals singled out, they will receive promotions due to their “courage and swift response” in the accident.

A statement from the Ministry of Interior on Monday evening reads: “As part of the directives of His Royal Highness Prince Salman bin Hamad Al Khalifa, the Crown Prince and Prime Minister to reward two civil defence personnel for their professional performance during the last round of the Bahrain Grand Prix (Formula 1), His Excellency Interior Minister Shaikh Rashid bin Abdullah Al Khalifa ordered exceptional promotion for the two of them.

“They have proven the preparedness and capability of police personnel in dealing with sudden accidents. HE Interior Minister received the two personnel in the presence of Chief of Public Security and Director-General of Civil Defence.

“He conveyed to them the thanks and appreciation of HRH Crown Prince. He hailed their professionalism in rescuing one of the participants in the race who met with an accident.

“He also hailed the competency of civil defence personnel for their courage and swift response, expressing best wishes for all in serving the nation.”