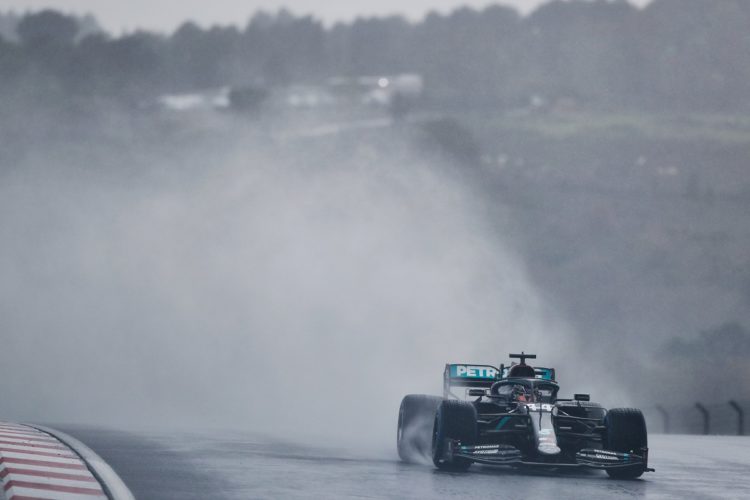 Mercedes has explained why it was so far off the pace during qualifying at the Turkish Grand Prix before Lewis Hamilton stormed to victory on race-day.

Drivers were forced to contend with a low-grip surface throughout the weekend due to a fresh layer of asphalt that had recently been deposited.

On Saturday for qualifying, the session was wet, with Hamilton ending up in sixth place – 4.7 seconds down on pole-sitter Stroll.

Speaking in its post-race F1 debrief, Mercedes’ Strategy Director James Vowles explained that the team simply couldn’t generate enough energy into the tyres over such a short space of time, which wasn’t a problem during the grand prix due to the high number of racing laps.

“In Q1 when cars were on the Wet tyre doing multiple laps and we weren’t poor relative to the field at that point, in fact both of our cars were in the top five,” Vowles said.

“But at the end of Q1, after multiple red flags, we saw the true extent of the problem. All teams, all drivers had just one timed out on Wets to make it work.

“It’s about tyre temperature and getting the tyres into the correct window. In Q2 it was a long run on Wets for everyone and again, we were offset by Verstappen by two seconds.

“Not the differences we were seeing at the end of Q1 but even so a large, large performance offset.

“And in Q3, Stroll did exactly the same run plan we did, with one timed lap on Wets followed by two timed laps on Intermediate tyres after it was proven to be faster.

“So if you dig into why, it is all about the energy that you are putting into a tyre, which the engine will produce energy as you turn and rotate the rear tyres and generate slip, the brakes will generate energy, both front and rear, and again that will go into the tyre.

“But obviously the ground is wet, and the rain is taking away energy from the tyres continuously, so it is all about putting more energy in than is being taken away by the conditions.”

Vowles added that it is unlikely the problem will recur in Bahrain and Abu Dhabi but “it’s all likelihood [it] could reappear again in the near future and we need to be prepared.”