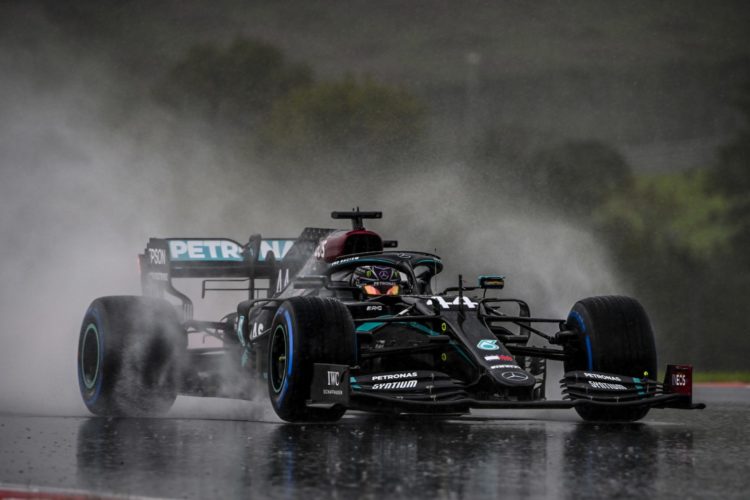 Lewis Hamilton has drawn level with Michael Schumacher atop the all-time record list by clinching a seventh Formula 1 world title at the Turkish Grand Prix.

Hamilton had to avoid being out-scored by sole rival Bottas by eight points at Istanbul Park in order to seal the 2020 crown with three rounds left to run.

Hamilton claimed victory in tricky conditions at Istanbul Park to clinch the title in style while Bottas spun four times and classified a lapped 14th.

Hamilton won his first world title in his sophomore campaign in 2008 when a dramatic last-corner move in the Brazilian rain enabled him to beat Felipe Massa by one point.

It came a year after he missed out as a rookie to Kimi Raikkonen by just a solitary point.

But Hamilton’s prospects of adding to his titles with McLaren were compromised by sub-par machinery, mistakes and other setbacks.

As Red Bull emerged as Formula 1’s dominant force Hamilton only once entered the final round – in 2010 – with a mathematical chance of becoming World Champion.

Hamilton joined Mercedes for 2013 and a year later the squad surged to the front of the pack under overhauled Formula 1 regulations.

Hamilton bounced back from a spate of setbacks to beat team-mate Nico Rosberg to the 2014 title and a year later made it three.

In a tense and at times tumultuous 2016 campaign Hamilton missed out to Rosberg by only five points and the German shocked the sport by retiring just five days later.

Hamilton faced a renewed threat from Ferrari and Sebastian Vettel but claimed back the crown in 2017 and then in 2018 once more duelled with his fellow four-time World Champion.

Hamilton trailed mid-season but a sequence of emphatic displays lifted the Briton above the ailing Vettel and he joined Juan Manuel Fangio on five world titles.

Last year Hamilton made it six as Mercedes romped clear of its opposition early on in the season and kept team-mate Valtteri Bottas at arm’s length for much of the campaign.

Hamilton has largely dominated a 2020 season in which Mercedes has held a sizeable margin over its rivals.

His victory on Sunday was his 10th from 14 starts this season and the 94th of his career.