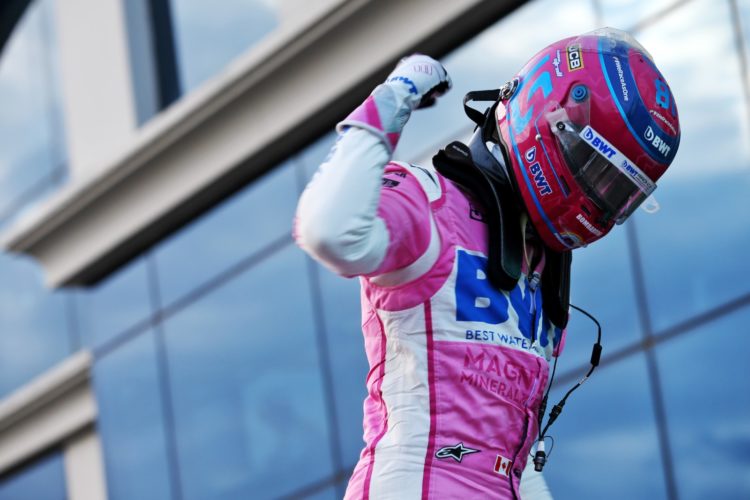 Racing Point driver Lance Stroll expressed shock in the wake of claiming a maiden pole position during a wet qualifying session at the Turkish Grand Prix.

Formula 1’s three-part qualifying hour was interrupted by persistent rainfall at an Istanbul Park that provided little grip in the wake of recent resurfacing works.

Stroll was a front-runner during a Q3 session in which conditions gradually improved, with drivers discarding Wet tyres to take on the green-banded Intermediate rubber.

Stroll leapt to the top of the timesheets with his final Q3 push lap and remained in front as the erstwhile dominant Max Verstappen failed to dislodge his effort.

“I can’t really put it into words right now,” said Stroll. “I’m shocked, I didn’t expect us to be up here after FP3.

“There were a lot of things we weren’t sure of coming into qualifying and we didn’t look competitive in P3 but I’m so happy right now.

“I really put that lap together there at the end. I was under a lot of pressure, I only had one lap to do it there at the end because we started on the Wet tyre and then we boxed for Inters.

“I had the confidence in the car and I just nailed pretty much every corner and pieced it together nicely and it’s such a great way to bounce back after a few rough weeks.

“Since Mugello really it’s been a rough ride for me. So it feels good, it feels really good right now.”

Stroll’s effort meant he was the first Canadian driver to achieve a pole position since Jacques Villeneuve in 1997 and the fifth-youngest in Formula 1 history to top qualifying.

“In these conditions, you don’t really have time to think about where you are and what’s going on around you,” he said.

“It’s really just the next corner in front of you, and then once I got on the Inters, I knew we were in good shape and the car felt like it was pretty hooked up for those conditions around here and I put it on pole.

“It’s a special moment for me. It’s one of the biggest highlights of my career for sure. We dream about these moments growing up and it’s pretty special.”