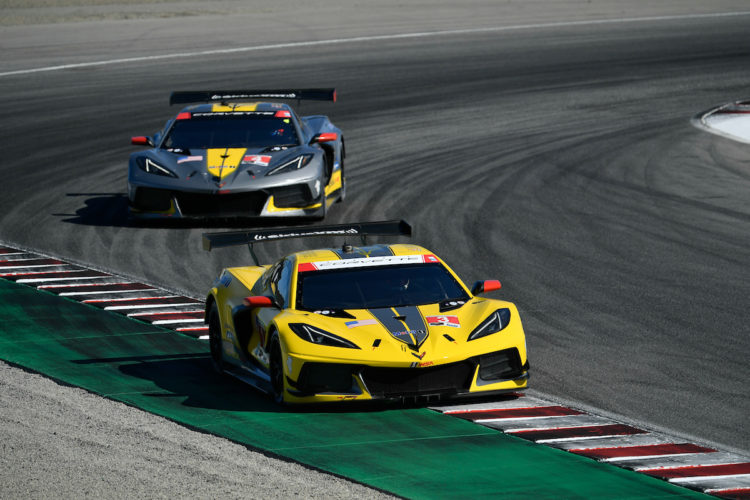 Antonio Garcia and Jordan Taylor have captured the GTLM titles in the IMSA Weathertech Sportscar Championship after team-mates Oliver Gavin and Tommy Milner were handed a post-race penalty.

Gavin and Milner had finished third in class in Sunday’s Hyundai Monterey Sports Car Championship event at Laguna Seca, but were demoted to last in class after failing post-race scrutineering checks. The #4 Corvette C8.R was found to have had a height infraction with the car’s rear diffuser.

The pairing were subsequently placed at the back of the class, promoting the Porsche duo of Nick Tandy and Fred Makowiecki to third.

As a result of the ruling, Garcia and Taylor have an insurmountable points lead after finishing in second place. The pair have taken five wins and six pole positions during the 2020 campaign and can no longer be caught in the point’s tally. Corvette Racing has also locked up the team’s title with six victories versus two for BMW and two for Porsche.

AIM Vasser Sullivan also sealed the Weathertech Sprint Cup title on Sunday, with Aaron Telitz and Jack Hawksworth only having to start the final round of the sprint championship in order to win the title.

It marks the first time Lexus has won a championship in IMSA and the second time the Sprint Cup champions have been crowned. Pfaff Motorsports won the driver’s title in 2019 with Zacharie Robichon, while Meyer Shank Racing and Porsche took the team’s and manufacturer’s titles respectively last year.

The duo had a difficult outing at Laguna Seca. The #14 Lexus started at the back of the grid after a puncture in qualifying and battled on to finish eleventh place. This allowed Meyer Shank Racing to regain the GTD championship lead heading into the final round at Sebring later this month.