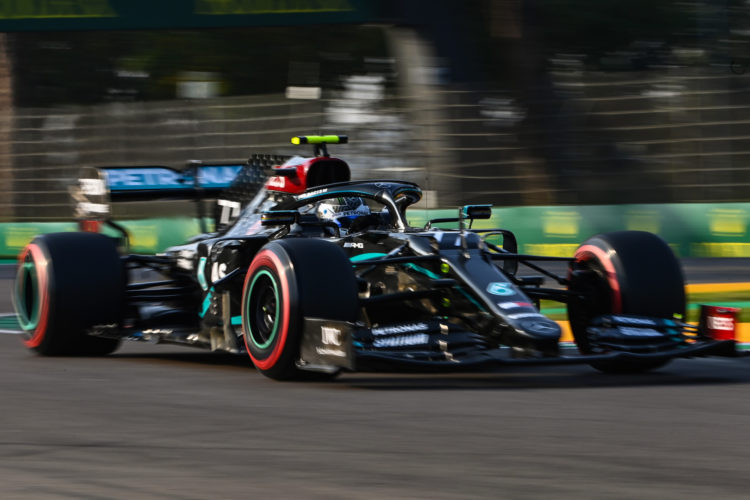 Mercedes preserved its unbroken streak of titles in Formula 1’s hybrid era as it wrapped up a seventh straight Constructors’ Championship at Imola.

Mercedes sealed it with a 1-2 finish at the Emilia Romagna Grand Prix while Red Bull failed to score.

Mercedes dominated the championship between 2014 and 2016, surging to the front upon the introduction of 1.6 litre V6 power units, taking 51 wins from 59 starts.

It was only beaten by Red Bull and Ferrari on a handful of occasions as much of the narrative centred on the battles between Lewis Hamilton and Nico Rosberg.

It faced a renewed threat from Ferrari after aerodynamic regulations were changed in 2017 and off-track it also had changes, with Valtteri Bottas replacing Rosberg in the driver line-up, and James Allison taking the spot of Paddy Lowe in the technical organisation.

In 2018 the lead of the standings exchanged hands on several occasions through the opening half of the campaign before Mercedes pulled clear after the summer break.

It is the only year of the hybrid era in which the Drivers’ battle has been settled before the Constructors’ crown as Mercedes had to wait until the penultimate round in Brazil until it clinched proceedings.

Last year Mercedes comfortably pulled clear of Ferrari and Red Bull early on to cruise to another crown and this season it has remained substantially ahead of its opposition.

Mercedes’ achievement is the first time that one team has won seven successive Constructors’ titles, surpassing Ferrari’s benchmark of six in a row (1999 to 2004).

Mercedes has now joined Lotus on seven titles and is behind only three teams in the record books.

Ferrari leads the way on 16 Constructors’ titles – its most recent coming in 2008 – while Williams has taken nine and McLaren eight.