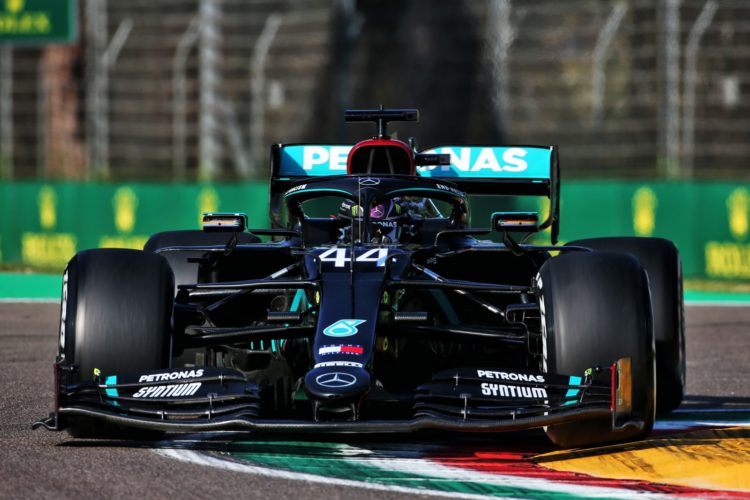 Formula 1 has condensed its on-track action into two days on account of the logistical challenge of moving equipment the long distance by road from Portimao to Imola.

However only three weeks ago the inclement weather at the Nürburgring forced the abandonment of Friday’s action – effectively giving Formula 1 an early taste of an abbreviated weekend format.

Imola last hosted a Formula 1 event back in 2006 and minor modifications have since been made to the circuit, most prominently the removal of the Variante Bassa chicane.

Mercedes is poised to clinch the Constructors’ title this weekend – as Red Bull needs to out-score it by 33 points to keep the fight alive – but the Drivers’ battle cannot yet be settled.

This weekend’s round is the third to take place on Italian soil, matching a record set in 1982, when a trio of events were held in the United States.

Italy’s two teams hold sixth and seventh in the Constructors’ Championship with Ferrari in the midst of a dire campaign while AlphaTauri stunned by triumphing at Monza.

AlphaTauri, whose factory is located 15km away at Faenza, carried out a filming day with its 2018 and 2020 cars at the venue in June.

Both teams showed glimpses of speed towards the end of the 90-minute session.

Charles Leclerc hauled his Ferrari SF1000 up to fifth overall though team-mate Sebastian Vettel classified outside of the top 10 in 12th.

Renault had been set for fourth and fifth overall before being shuffled down by the late improvements made by Gasly and Leclerc.

Alexander Albon was a subdued ninth, over a second behind Red Bull team-mate Verstappen, while Lance Stroll edged Sergio Perez for the final top 10 spot.

McLaren is in the midst of a tight three-way battle for third place overall in the standings but finished down the order in practice.

Carlos Sainz and Lando Norris were only 14th and 16th respectively but set their best times on the Medium tyres rather than the Softs employed by their rivals.

Sainz went off through the Rivazza gravel while Norris had set a time good enough to be inside the top 10 but it was deleted after he exceeded track limits at Piratella.

Elsewhere Romain Grosjean was an encouraging 13th for Haas, six spots and half a second ahead of team-mate Kevin Magnussen, while Alfa Romeo took 15th and 17th respectively, Antonio Giovinazzi in front of Kimi Raikkonen.

Williams was slowest – though George Russell narrowly beat Magnussen – and also lost some session time after Nicholas Latifi’s run was truncated by a brake-by-wire problem.

Qualifying for the Emilia Romagna Grand Prix will begin at 14:00 local time.