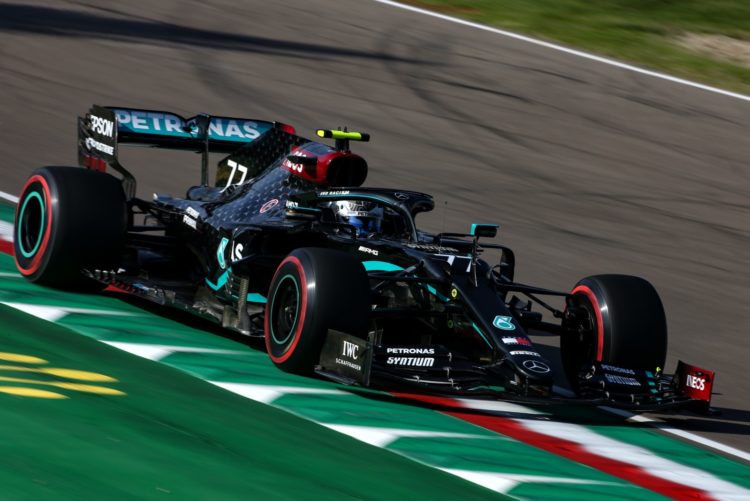 Formula 1 has returned to Imola after a 14-year absence, on account of the Covid-19 pandemic, marking the third visit to Italy in 2020.

Hamilton held the advantage after the opening Q3 runs but Bottas turned the tables in the final stages of the 12-minute shootout.

It maintained Mercedes’ unbeaten record in qualifying this season.

Nearest rival Max Verstappen, who recovered from a spark plug issue that threatened to derail his day in Q2, finished half a second adrift in third.

Italy has two Formula 1 teams represented on the grid and while Ferrari is the most distinguished AlphaTauri’s factory is located just 15km away from Imola at Faenza.

Pierre Gasly, who showed strong pace in the sole practice session, led AlphaTauri’s charge and claimed fourth place in order to join ex-team-mate Verstappen on the second row of the grid.

AlphaTauri team-mate Daniil Kvyat also made it through to Q3 and while he classified within two-tenths of Gasly the closely-fought nature of the session meant he finished eighth.

Daniel Ricciardo classified fifth for Renault, in front of Alexander Albon, who once more fell shy of getting on par with team-mate Verstappen.

Charles Leclerc fronted Ferrari’s challenge to take seventh as team-mate Sebastian Vettel failed to make it through to Q3.

Racing Point holds third in the Constructors’ Championship but had both cars knocked out in the second segment of qualifying.

Sergio Perez missed out on a top 10 spot by just 0.010s while Lance Stroll finished at the foot of the 15-driver session after having a lap time deleted.

George Russell made it out of Q1 once more and even challenged for the Q3 spots, coming three-tenths shy, and out-qualifying Vettel for a second successive round.

Predictable at the back

There was a similar trend at the back of the grid with the Haas drivers, Alfa Romeo duo and sole rookie Nicholas Latifi dumped out in Q1.

Romain Grosjean and Kevin Magnussen were 16th and 17th respectively as the Dane wrecked his prospects of progressing when he went off through Rivazza.

Kimi Raikkonen set a time quick enough for Q2 but it was erased after he exceeded track limits.

Nicholas Latifi missed some of practice after a brake-by-wire problem and again trailed Williams team-mate Russell.

Sole home representative Antonio Giovinazzi finished as the slowest of the 20 drivers.