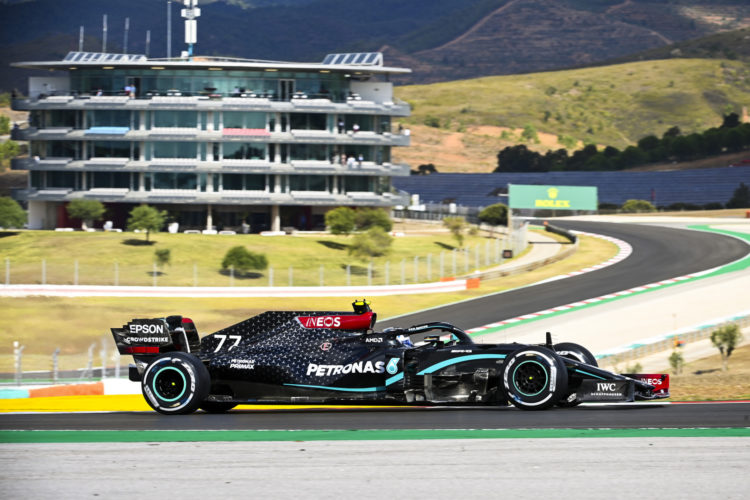 Formula 1 is competing at the Algarve International Circuit, also known as Portimao, for the first time, as part of the revised schedule implemented due to the Covid-19 pandemic.

Formula 1 last raced at Portugal in 1996, when the Estoril Circuit, located close to capital Lisbon, was utilised.

Warm and sunny conditions prevailed for much of the 90-minute session.

Drivers complained about the lack of grip from the recently re-laid surface, particularly during the early stages of the session, with several suffering off-track moments.

That caused several lap times to be deleted when drivers drifted wide through Turns 1 and 4, with the FIA having warned on Thursday that there will be no tolerance.

Bottas retired from the most recent event in Germany and Mercedes installed countermeasures to both cars in the wake of the issue, which was determined to be a fault within the Control Electronics.

After early running on the Hard compound tyres the majority of the field switched to Mediums for the second half of the session, as times gradually lowered.

The quickest non-Mercedes driver, which was once more Red Bull’s Max Verstappen, set a time 0.781s down on Bottas’ benchmark, albeit on Hard tyres.

Ferrari has brought the final part of its recent upgrade package to Algarve, focusing on the diffuser, and Charles Leclerc showed encouraging speed by classifying fourth overall.

The youngster has displayed strong one-lap pace in recent events, qualifying as the third-fastest team at two of the last three rounds, but has yet to convert it in race trim.

Leclerc, who like Verstappen set his best time on Hard tyres, recovered from an early Turn 14 spin to finish 0.899s behind Bottas and split the Red Bull drivers, with Alexander Albon fifth.

Carlos Sainz was the lead McLaren driver in sixth, ahead of Racing Point’s Sergio Perez, while Kimi Raikkonen was one of few drivers to improve late on as he elevated himself to eighth.

Lance Stroll returned to Formula 1 action after missing the Nürburgring event prior to testing positive for Covid-19.

Having provided a negative test result on Monday he was cleared to return to the paddock and finished the session down in 15th spot.

Esteban Ocon was a low-key 19th for Renault and returned to the pits after the chequered flag with smoke pouring from the rear of his R.S.20.

Ocon was instructed not to change gear as he slowly brought the car back to the garage.

Second practice for the Portuguese Grand Prix will begin at 15:00 local time.