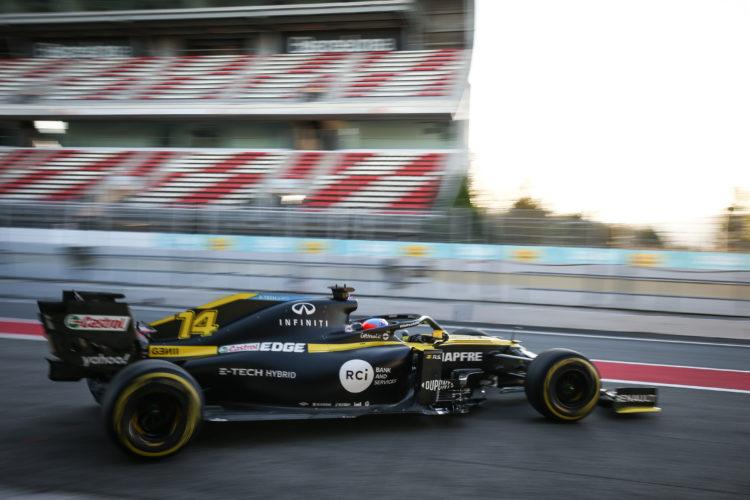 Esteban Ocon says Fernando Alonso’s early work with Renault is already boosting the team’s progress as it continues to chase third in the Constructors’ Championship.

Alonso has ramped up his involvement with the team since wrapping up his Indianapolis 500 programme in late August.

The Spaniard has spent time in Renault’s simulator and returned to on-track action last week when he sampled the R.S.20 as part of a filming day.

Renault has made strong progress in recent weeks, returning to the podium positions, and has propelled itself into contention for third in the standings.

“I have seen how keen he is, and he did send me a message that if we needed anything he would be there, no problem,” said Ocon.

“It is good at the moment that he goes in the simulator. It is three opinions basically, because me and Daniel and him are all practicing on the simulator before going to the races.

“To have a good start for the weekend, and to have three confirmations, is better than two.

“So it is been good that recently he has been working closely with the simulator team, and I’m sure he will very soon come to the races.”

Renault has only been out-scored by Mercedes across the last five rounds, in spite of mechanical issues afflicting Ocon at Mugello and the Nürburgring, and put the progress down a combination of factors.

“Our understanding in terms of setup has increased massively since some events, and since Barcelona and Budapest, that is very clear,” said Ocon.

“We also had some updates that we managed to understand quite well and to make it work, because when you put the upgrades on sometimes you do not unlock the performance straightaway.

“But then you understand where it could work and where you could gain the performance, and that is what we have done. “Overall with the package that we have, little parts by little parts, and the set up understanding that we have made, I think overall we are a lot stronger now.”