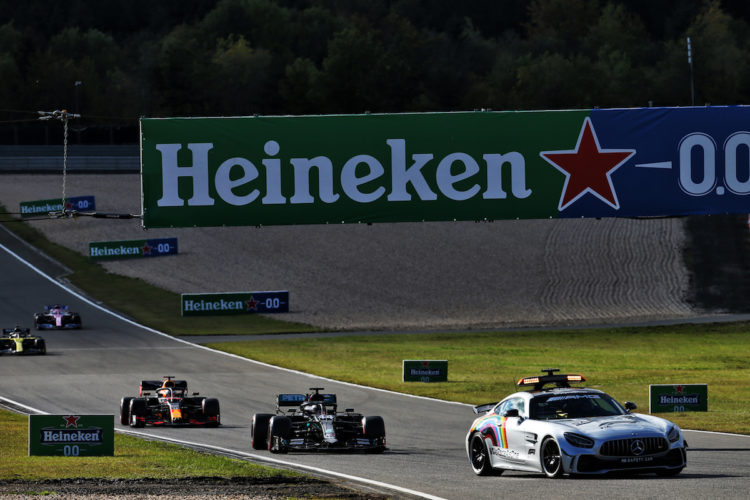 Formula 1 Race Director Michael Masi says concerns over the location of Lando Norris’ stricken McLaren, and the risk of a fire breaking out, led to the decision to deploy a Safety Car at the Eifel Grand Prix.

The McLaren driver, who pulled over after suffering from a Power Unit issue, was stopped off the track at Turn 6 and beside a barrier opening.

Rather than deploy a Virtual Safety Car, a full neutralisation of the race was called, leading some to accuse that the decision was made to add more excitement to the grand prix.

However, as Masi explained afterwards, Race Control wasn’t satisfied that his car could simply be wheeled through the gap in the barrier.

“A couple of points there, one was obviously Lando’s car had some smoke and fire,” Masi said.

“The other one was at first glance, we weren’t confident that the car could actually be recovered into the opening that was there due to the tightness of it.

“So rather than having to react along the way, it was determined to go for a Safety Car.

“That way it could be dealt with all at once immediately. It was the safest action in that circumstance.”

Despite Norris’ car being recovered quickly , the Safety Car stayed out for five laps, which drew complaints from some drivers.

However at that stage leader Lewis Hamilton had lapped all bar his nearest four opponents.

”There’s a requirement in the sporting regulations to wave all the lapped cars past,” Masi said.

“From that point, it was position six onwards that were still running [on the lead lap], so between 10 or 11 cars had to unlap themselves.

“Therefore the Safety Car period was a bit longer than what we would have normally expected.”