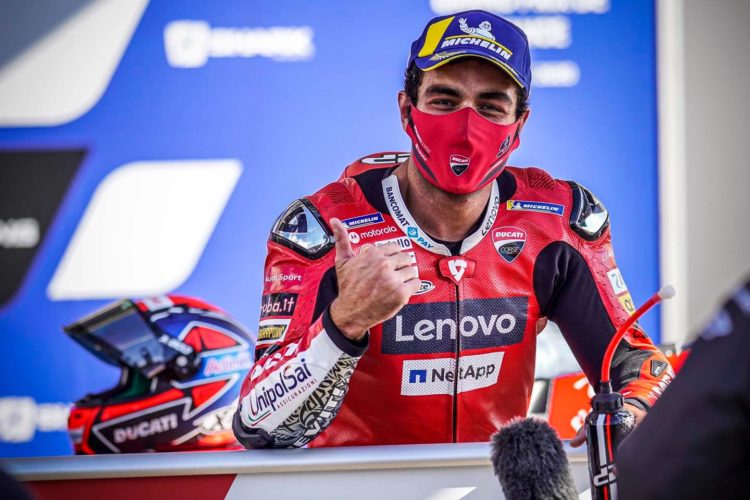 The winner of the French Grand Prix Danilo Petrucci says that the victory has makes him feel “really happy” after enduring a tough start to the 2020 MotoGP season.

The Italian Factory Ducati rider cruised his way to winning the race despite mounting pressure from Repsol Honda rider Alex Marquez, who finished second and his team-mate, Andrea Dovizioso.

When asked about how it felt to win the race, Petrucci said: “I don’t know how I feel now because it’s really a mixture of emotions. It has been a very difficult period at the beginning of the season and until one month to go I really had difficult period but I’m really happy to be here again.”

Much like the majority of the riders, Danilo could not predict the weather but was elated with his efforts after previous performances at the Le Mans circuit.

“For sure it’s been tough because I didn’t expect the rain and everybody always says that I’m fast in the rain but maybe I score only a podium in my life or maybe two and the good thing is: in Le Mans in the last year I have been second, third and now first and I’m really happy I don’t know how many words I have to say”, Petrucci said.

Describing the moment he realised he was under attack from Alex Marquez, Petrucci said that he had to push to keep the Spaniard at bay but almost ended up crashing at the Turn 3 chicane.

He said: “I saw on the video that Marquez was riding 1.2s faster than me and I said: “Come on, push.” I pushed and when I arrived at the first chicane I lost the front but fortunately I could recover.”

The Italian also mentioned the race became harder in the closing stages due to the rear tyre of his Ducati wearing out.

“The last 10 laps were really difficult to manage because the rear tyre was completely clean but I managed to finish the race and I am so, so happy after this difficult time”, he said.