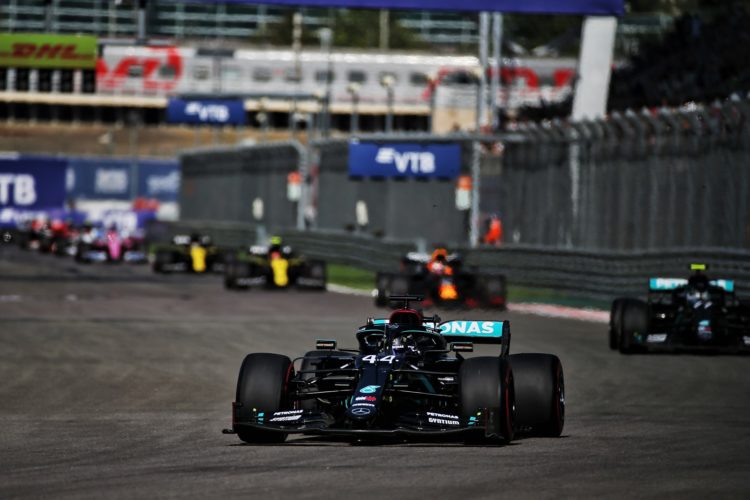 Reigning World Champion Lewis Hamilton is only two points away from a one-race ban after picking up more penalty points in Russia.

Under Formula 1’s regulations drivers must not exceed 12 penalty points during a 12-month spell.

Hamilton picked up two in Brazil last year when he collided with Red Bull’s Alexander Albon and had the same total added to his Super Licence when he again clashed with the youngster in Austria’s season-opener.

He also received two in Austria for a yellow flag violation in Q3 and two more at Monza for entering the pit lane when it was closed after Kevin Magnussen’s stoppage.

That left Hamilton on eight penalty points heading into the Sochi weekend.

On his way to the grid Hamilton stopped outside of the designated zone in order to carry out a start, having been informed by Mercedes that it was allowed, and was duly investigated.

The event notes, issued to all teams, stress that “cars may not stop in the fast lane at any time the pit lane exit is open without a justifiable reason.”

“A practice start is not considered a justifiable reason.”

Hamilton was handed two five-second time penalties, which he served at his first pit stop at the Sochi Autodrom, and also handed one penalty point for each violation, bringing his rolling 12-month total up to 10.

The first of Hamilton’s penalty points will not be wiped from his record until mid-November, after the Turkish Grand Prix, a year after he hit Albon at Interlagos.

It means Hamilton must negotiate the next four events without adding to his total and will be on eight points until at least July 2021.

Mercedes has Stoffel Vandoorne and Esteban Gutierrez as its nominated reserve drivers while Nico Hulkenberg was drafted in to compete for customer team Racing Point at Silverstone.