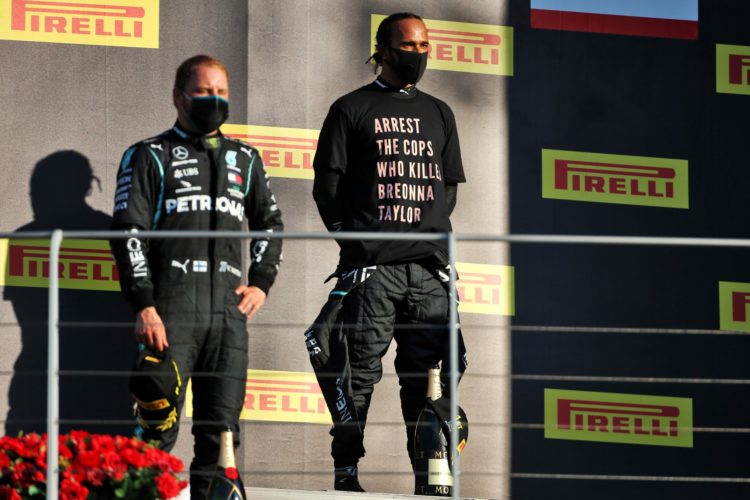 The FIA has tweaked its guidelines for the post-race podium ceremony in the wake of Lewis Hamilton’s protest at the Tuscan Grand Prix.

Hamilton donned a T-shirt underneath his overalls, displaying it in parc ferme and on the podium, that read ‘Arrest The Cops Who Killed Breonna Taylor’, in reference to the 26-year-old who was shot dead by police in her home in Kentucky in March.

Hamilton was not censured for his actions but the FIA has moved to clarify the procedure for the post-race ceremony moving forward.

In the post-race procedure notes issued on Sunday an FIA document confirmed that as usual “once out of their cars, the top three Drivers will be weighed by the FIA near their cars.

“Each Driver must remain fully attired until after they have been weighed (e.g.: Helmet, Gloves, etc.).”

However an additional clause has been added to state that they must remain fully in their overalls throughout the podium ceremony.

“For the duration of the Podium Ceremony and Post Race Interview Procedure, the Drivers finishing in race in positions 1, 2, 3 must remain attired only in their Driving Suits, ‘done up’ to the neck, not opened to the waist,” read the FIA’s notes.

“For the duration of the TV pen interviews and FIA Post Race Press Conference, all Drivers finishing must remain attired in their respective teams’ uniform only.

“For the avoidance of doubt this includes a Medical Face Mask or Team Branded Face Mask.”

The ‘End Racism’ recognition, which has taken place prior to the national anthem on the grid this year, will take place as usual.