Bottas wins in Russia as Hamilton is hit with two penalties 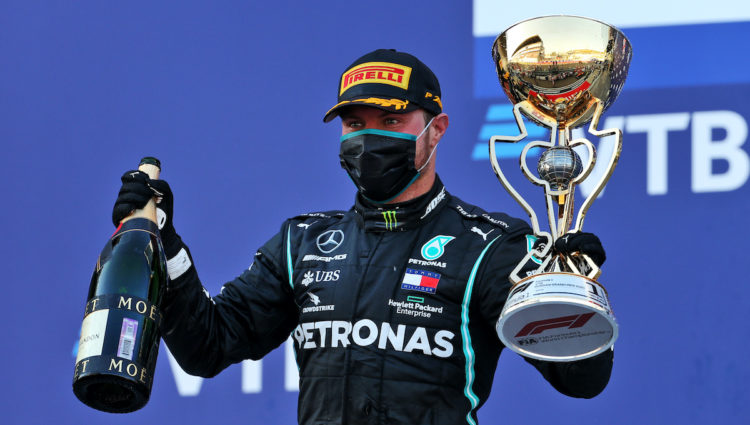 Mercedes’ Valtteri Bottas won his second race of the 2020 Formula 1 season in Russia, bringing to an end an eight-race victory drought, following his Austrian Grand Prix success back in July.

Bottas, who started third, jumped Red Bull’s Max Verstappen at the start of the race and out-braked team-mate and pole-sitter Lewis Hamilton to grab the lead, only to cut Turn 2, allowing Hamilton to retake the lead.

However Hamilton’s chances of matching Michael Schumacher’s 91 victories this weekend would be dealt a major blow for a pre-race infringement, which earned the reigning champion two penalties!

Hamilton carried out two practice starts outside of the pre-determined area, which was noted by the FIA before the race started. It was until several laps into the race that the stewards handed Hamilton a five-second time penalty for each start, earning the Briton a 10-second time penalty and two penalty points – bringing his tally to ten and close to a race ban.

Hamilton served both time penalties during his one and only pitstop, which dropped him from the lead down to 11th. He would recover to third to claim the final podium position behind Verstappen, who drove a fairly anonymous race, unable to challenge race winner Bottas, finishing seven seconds adrift.

The start saw drama and a resulting Safety Car after two incidents. McLaren’s Carlos Sainz was one of a handful of drivers to run wide at Turn 2, with the Spaniard forced to navigate the bollards as per the rules, but misjudged the gap and collided with the wall.

Sainz retired with damage on the spot and forced team-mate Lando Norris to take avoiding action, which dropped the Briton to the rear of the field. Norris would take an early stop and recovered to ninth where he enjoyed an intense battle with Red Bull’s Alexander Albon and AlphaTauri’s Pierre Gasly, but was forced to make a second stop and dropped to 15th.

Lance Stroll was the only other retirement as he too was involved in an opening lap collision. The Canadian was tagged by Ferrari’s Charles Leclerc at Turn 4, spinning him into the wall.

The Safety Car stayed out for a total of five laps, with Hamilton controlling the restart to retain the lead from Bottas prior to his pitstop and subsequent penalties.

Renault’s Daniel Ricciardo was involved in an odd incident when team-mate Esteban Ocon moved aside to allow the Australian through under the instruction of his team, only for Ricciardo to lock-up and run wide, earning himself a five-second penalty for failing to take the longer path through the bollards.

He took in his stride through, replying: “Okay, I’ll drive faster,” when informed by his engineer of the penalty, adding: “My bad. I’ll make up for it.” He did and finished far enough ahead of sixth-placed Leclerc to take fifth, behind Sergio Perez.

Ocon was seventh ahead of the AlphaTauri duo, whilst Albon took the final point for tenth place.