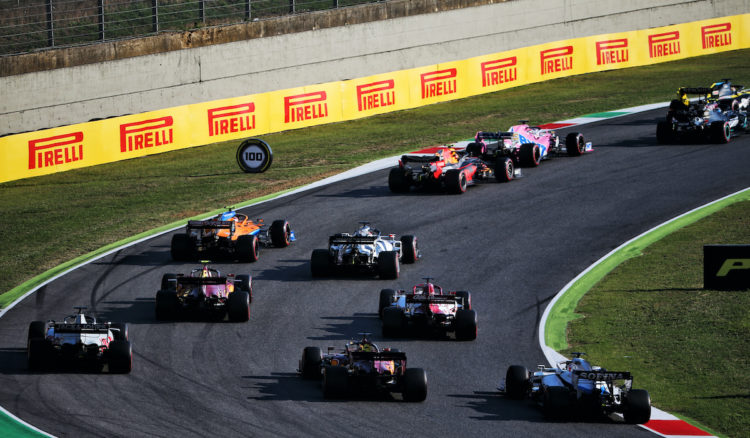 Formula 1 revised its regulations in order to ensure standing starts on the grid could take place after Safety Car periods.

Its introduction was initially undertaken so that standing starts could occur once conditions were deemed sufficiently safe in the event of wet weather.

The rule was first applied in Formula 1 at last year’s rain-hit German Grand Prix but has since been used in the wake of race stoppages at the recent pair of events in Italy.

The drivers reformed on the grid following Charles Leclerc’s crash at Monza and then did likewise twice at Mugello, after the multi-car pile-up and Lance Stroll’s accident.

Russell lost spots at both standing restarts, most costly in the final shootout, when he dropped from ninth position to the rear of the 12-car pack.

“The biggest thing is the tyre change,” said a frustrated Russell.

“These guys are getting free tyre changes [during red flag periods], we were on a good tyre strategy, the tyres were great for us, suddenly people can box and put whatever tyres they want and get a free stop.

“I was ahead of Charles [Leclerc], he didn’t box, he lucked into the red flag, then he’s ahead of me, and can just put a new set of tyres on. I lose a position to him under the red flag.

“If they’re going to do this more often they need to work on a couple of rules, you shouldn’t be allowed to have a free tyre change, it’s part of the race, you’re in the race, you need to stay on the tyres you were on at the time.

“People planned their strategy around a normal race not around races that are getting two red flags in.”

Russell also pointed to the reduced fuel loads, compared to a normal start, as another factor.

“I think the whole point of the standing start was after like a wet start, if it was a Safety Car start under wet conditions [you can] then go to a standing start,” he said.

“After a red flag I’m not sure [about it]: you’re in the middle of your race, on different fuel loads, we do all of our starts at 100+ kg [of fuel], suddenly we did our starts at 40kg or whatever and it has a massive effect on that launch.

“In all honesty now in the last two weeks it’s been a proper shake-up, less so this week [at Mugello], but obviously last week [at Monza] it was a huge shake-up ultimately from the guys at the FIA.”