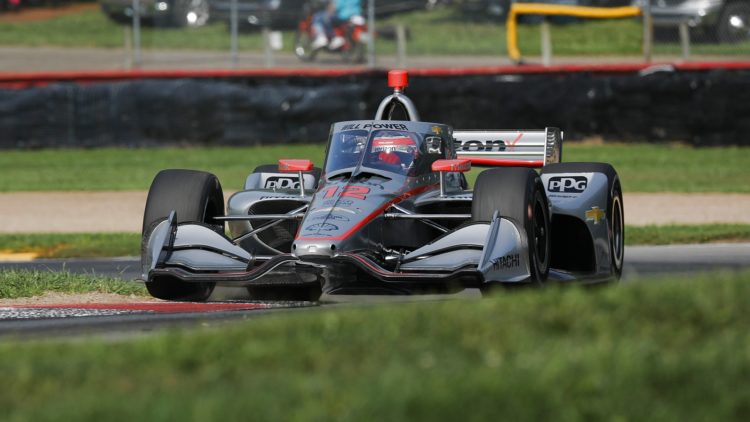 WIll Power on track at Mid Ohio Sports Car Course.

Will Power started on pole in his Team Penske Chevy for the first race of a double-header from Mid-Ohio Sports Car Course, and never relinquished the lead excpet during the middle of pit stop cycles.

The veteran Australian was never even challenged for the top spot, pulling a large gap right from the outset.  By the end, Power had over a seven-second lead and only had some lapped traffic to contend with.

Elsewhere in the field, it was a mostly single-file affair.  Passing proved difficult and there were only a few shakeups to the order throughout the entirety of the race.

As the laps wound down, a small but strong rain shower threatened to throw chaos into the mix.  But in the end, the rain arrived five minutes after the checkered flag, and Power’s first win of the season was not affected.

Josef Newgarden joined his Team Penske team-mate up at the front all day, but he was no match for Power.  Regardless, the second place finish is a solid points day for the reigning champion who finished eight places higher than Scott Dixon, and he still has a slim chance at catching the Kiwi for the top spot with four races remaining.

Dixon for his part just didn’t have the car to compete at the front of the field.  An uncharacteristically poor qualifying effort left him back in traffic for the entirety of the day.  The points leader had a few close calls throughout the day, but was able to keep his car clean on his way to a tenth place finish.

Alexander Rossi had a strong car all day, and used the day’s two pits stops to his advantage.  The Andretti Autosport team called Rossi in late for the first stop, then early for the second, and each time he gained ground.  He took his second podium of the year and a much-welcomed solid result.

Even though there was not an overly high number of on-track passes, standout rookie Rinus VeeKay once again showed that he was capable of making some impressive passes at speed.  The newly-turned 20-year-old was the last of the late breakers with 20 laps remaining, passing both Dalton Kellett and Colton Herta in the same corner.  VeeKay ended the day in eighth, the highest rookie finisher of the day.

Marco Andretti was the only driver to have any troubles during the race, taking a drive through the grass near the end of the race.  The excursion did not help his already bad day, and the Indy 500 polesitter ended the day 23rd and last.

Tomorrow will see another full race schedule, with the field of 23 drivers doing a qualifying session followed by another 75-lap race.  There will be plenty of rain overnight to wash away all the rubber and give the drivers a new challenge for the second race of the double-header.