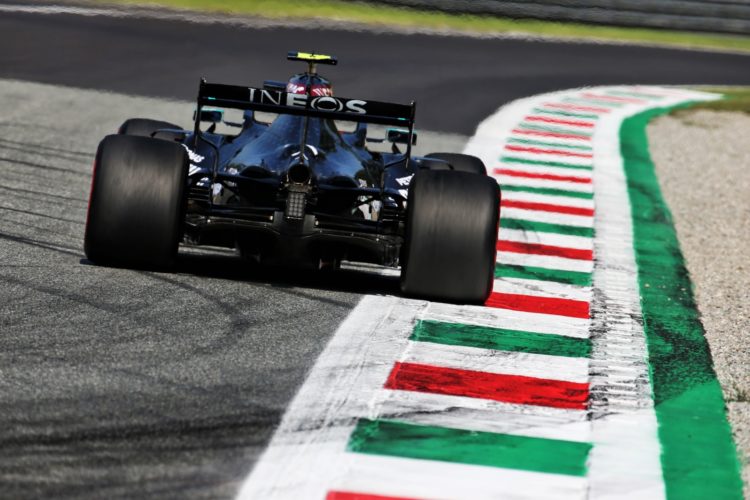 Bottas set a time of 1:20.009 to finish atop the standings in the one-hour session, which was held in hot and sunny weather at the high-speed Monza track.

Mercedes team-mate Hamilton finished down in fifth position in the wake of a messy end to running.

Several drivers were compromised when Renault’s Daniel Ricciardo came to a halt at the second chicane due to a suspected fuel pump issue, causing the session to be halted.

Only a few minutes remained on the clock when running resumed and Hamilton encountered two slow cars on his push lap, having to dip a wheel onto the grass into Parabolica to avoid striking Haas’ Romain Grosjean.

Hamilton was one of several drivers fearing that qualifying at Monza could be a ‘nightmare’ due to drivers backing off through the final sector of the lap.

McLaren caught the eye on Friday with Lando Norris third but the Briton wasn’t entirely happy with the MCL35, having suffered issues earlier in the day.

But in FP3 the MCL35s were towards the front of the pack, with Carlos Sainz second and Norris third.

Sainz was just 0.229s behind Bottas while Norris was only a tenth further back, narrowly in front of Ricciardo and Hamilton.

Red Bull took only sixth and seventh but Max Verstappen was one driver hurt by the red flag while Alexander Albon wrecked a good lap when a snap of oversteer pitched him wide through Parabolica.

Ferrari took pole position and victory 12 months ago at Monza but its SF1000 hasn’t been at the races this year, with an aerodynamically dubious car compromised by a lacklustre power unit.

In the final session Charles Leclerc was at least in the mix, but placed 11th, while Sebastian Vettel was only 15th, slower than Grosjean in the Ferrari-powered Haas.

AlphaTauri starred on Friday but was only 12th and 13th in FP3, with Pierre Gasly ahead of Daniil Kvyat.

Kevin Magnussen and Kimi Raikkonen were 16th and 17th respectively while Williams duo George Russell and Nicholas Latifi were far closer to their rivals than on Friday as they classified 18th and 19th.