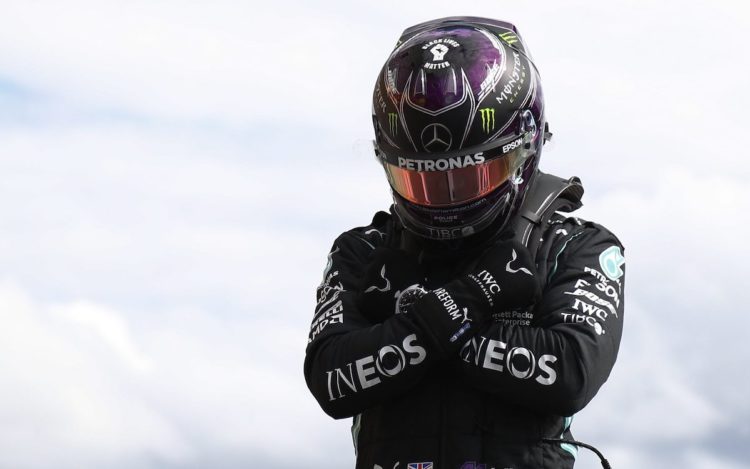 In a session in which he was never threatened Hamilton opened Q3 with a time of 1:41.451s before improving to a 1:41.252s, recording the 93rd pole position of his career.

Hamilton dedicated the achievement to actor Chadwick Boseman, who succumbed to colon cancer earlier on Friday.

“It’s a really important pole for me. I woke up to the saddest news of Chadwick passing away. It’s been such a heavy year for all of us. It was hard to focus with that hanging on my heart. For what he’s done for our people. He’s such a shining light. Wakanda forever,” said the Briton after the session.

Renault has displayed encouraging one-lap pace throughout that weekend and carried that momentum into qualifying.

Daniel Ricciardo held third spot after the opening Q3 runs and was only overhauled by Verstappen through the second laps, leaving him fourth.

Esteban Ocon classified sixth in the sister R.S.20, behind Red Bull’s Alexander Albon, while McLaren and Racing Point completed the remainder of the top 10.

AlphaTauri’s Daniil Kvyat and Pierre Gasly were split by just 0.015s – and Kvyat a mere 0.008s from Q3 participant Norris – but both missed out on a spot in the top 10.

It nonetheless gives the pair a free choice of starting tyre for Sunday’s race.

Ferrari has endured a troubled weekend at Spa-Francorchamps and its pace in FP3 was such that an elimination in Q1 appeared a possibility.

It managed to work its way through the first session but was never in contention to progress further.

At a venue where it has romped to victory across the last two years Charles Leclerc and Sebastian Vettel will share the seventh row of the grid.

The SF1000s were faster only than the representatives from perennial 2020 backmarkers Williams, Alfa Romeo and Haas.

Williams was also braced for a struggle due to the draggy nature of its FW43 but a surprised George Russell got out of Q1 for the fifth time this season, and will start from 15th.

Neither Alfa Romeo nor Haas made it through to Q2, with Kimi Raikkonen beating Romain Grosjean by a tenth of a second, with a similar gap back to Antonio Giovinazzi.

Kevin Magnussen was in the mix but scuppered his prospects when he slid wide through the Stavelot gravel on his last push lap, an error that left him last.

Williams rookie Nicholas Latifi was the only interloper among the Ferrari-powered cars at the back of the field, as he failed to find the similar gains achieved by Russell.