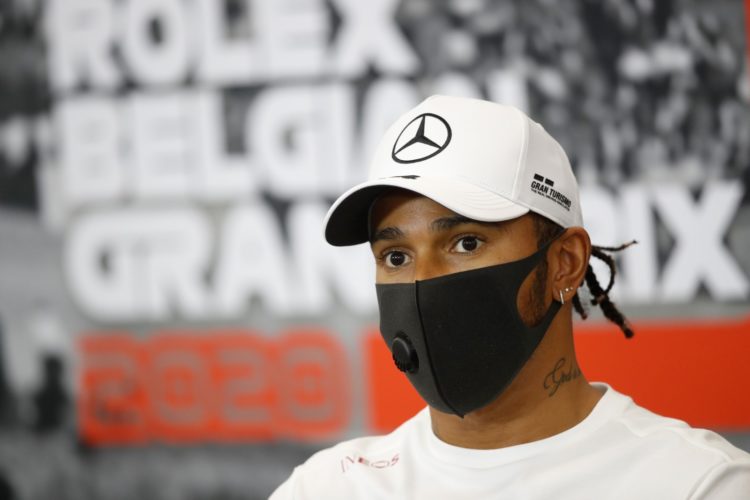 Lewis Hamilton says he supports athletes who have withdrawn from sporting events in the past few days but says there is no intention to follow suit at Formula 1’s Belgian Grand Prix.

The World Champion has been a vocal supporter of recent movements aimed at raising attention of race-related issues on a global scale.

Matches in the NBA, MLB and MLS in the United States have been postponed after players walked out in protest, following the shooting of black man Jacob Blake by police in Wisconsin on Sunday.

It comes after the widespread protests and marches that took place in the wake of the fatal shooting of George Floyd earlier this year.

“I think it’s incredible what many out there in the States are doing with their sports, all the way down to the people that are hosting and commentators for example, so many people are standing with the players and really pushing for change,” said Hamilton.

“It’s a shame that’s what’s needed over there in order to get a reaction, but that is in America and I don’t know if me doing it here will particularly have any effect — we are in Belgium, we are not in the United States.

“I haven’t spoken to anyone about it, but I am so proud of everyone out there and I do stand unified with them to try and do what we can over here.

“I don’t know how us not doing the race, it would still go on, that’s the thing, but as I said, I’ll try and speak to Formula One to see what else we can do to continue to raise awareness, continue to help push.

Hamilton’s fellow World Champion, Sebastian Vettel, had echoed the Briton’s view in believing a boycott of an event in Belgium would be less appropriate.

“We said in the strong message during the first event after such a difficult time for everyone, our feeling was very clear that we want to continue sending that message,” he said.

“It’s probably one of those things that doesn’t go away overnight and we felt very strongly about it and wanted to continue.

“What’s relevant is that we’re all united and we want to continue sending a message because we believe it’s important. That’s what we are doing.

“Now, if you ask how long we are going to continue, there is no answer on that, obviously it is important to us to keep sending the message and stand for that, I think that is what we will continue to do.

“I think the message that has been taken in the US with some players boycotting or going on strike, not going out for the game and therefore the games having to be postponed, I think they are more US specific.

“I don’t know the complete background, but from where we are, we are happy as drivers in our actions and want to keep sending that message.

“Having said that, we know it doesn’t change things overnight and it’s only a very, very small contribution.

“But hopefully everybody that’s tuned in and sees it gets the point and gets the message and takes a little bit off for the next steps he is facing in life.

“I think it’s one thing to take action in public but more importantly it’s how everybody is acting and confronting it once the cameras are off.

“That’s true for us, being in a spotlight a certain amount during a weekend, but also valid for everyone else.”