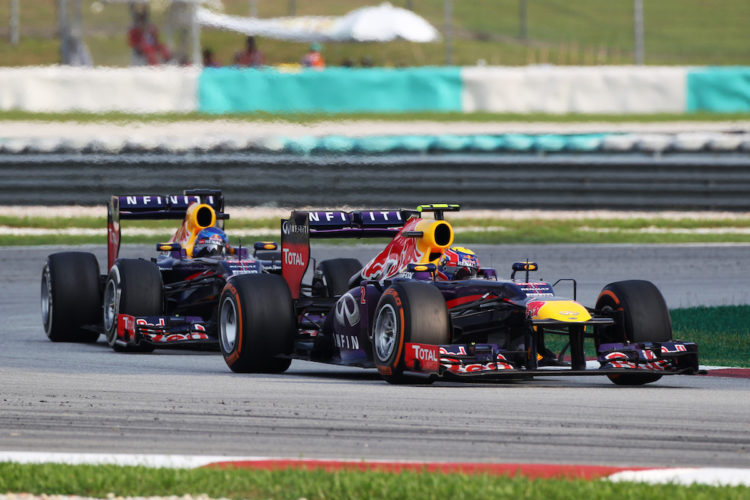 Mark Webber admits he has regrets over not turning his engine up into a higher power mode amid his battle with former team-mate Sebastian Vettel at the 2013 Malaysian Grand Prix.

Webber and Vettel’s relationship endured a number of strains during their five seasons as team-mates at Red Bull from 2009 to 2013, with the final year seeing the infamous ‘Multi-21’ incident at Sepang.

Towards the end of the race, Vettel attacked Webber for the lead, despite being instructed by the team to hold position and secure a one-two finish for the Milton Keynes-based squad.

Vettel managed to get past and crossed the line in first place, taking the first of his 13 race wins during the 2013 season, with Webber being forced to settle for second.

Speaking recently on F1 Unscripted, Webber disclosed that he wished he had used more engine power to fight against Vettel and retain the lead.

“It was a bizarre scene. One of my biggest regrets, I should have turned my engine right back up,” the Australian said.

“Instinctively, I’m like, ‘well, we should just be closing this race out. We’ve only got three, four or five laps left to go and we’re fighting each other and using a lot of machinery’.”

Webber accepts that he was not blame-free in the tumultuous relationship between the pair, but ponders if Vettel also has regrets over how he handled the situation in Malaysia.

“I think that even deep down, who knows, if Sebastian still to this day sort of regrets that particular grand prix. Maybe he doesn’t, I’m not sure.

“But I wasn’t an angel at certain other events, but that one… there were so many scenarios that brewed to this point, and this was another one that was highly publicised.”

Webber retired from F1 at the end of the 2013 campaign and says that at the time of the race in Malaysia, he had already made his decision to walk away from the sport.