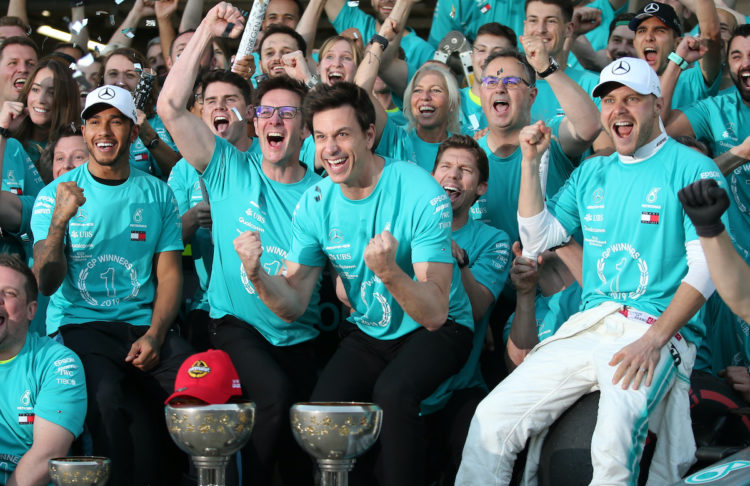 Mercedes drivers Lewis Hamilton and Valtteri Bottas have both admitted it would be a shame to see team boss Toto Wolff leave, but both are fully supportive of whatever decision he makes.

Wolff has been with the Mercedes team since 2013, having previously been on the board of directors at Williams where he held a 5 per cent stake in the outfit, but after several years of success which has delivered five consecutive Constructors’ and Drivers’ Championships, the Austrian is considering where his future lies.

Wolff, who is a shareholder in Mercedes motorsport, recently acquired a small stake in Aston Martin which next year will enter F1 with Racing Point. Wolff insisted at the time that it was purely a financial investment, but it has led to some speculation about his future and whether he could land at Aston Martin in the future.

The 48-year-old has remained coy on his plans which he says are yet undecided, only confirming that he is in a “moment of reflection” with regards his future.

But both Hamilton and Bottas are supportive of whatever decision Wolff takes, with the pair confirming it won’t impact their own futures with the Mercedes team.

“We’ve done so much already together in this period of time,” said Hamilton. “I hope he stays because it’s fun working with him, and it’s fun negotiating with him and fun having the up and downs. So I’m truly grateful to Toto and I’ll be fully supportive in whatever he decides to do.

“What you’ve got to remember is that it’s a team of so many people. There’s almost 2,000 people in the team, or something like that. It’s not just down to one person, one individual.

“So yes, that’s not determining whether or not I stay,” he added, with the Briton yet to agree a new deal.

Bottas concurred, although the Finn has already agreed a one-year extension to his deal through 2021.

“I think Toto has been a really important part of the team and being a big part of helping the team to get to the state where it is now. But just like Lewis said, it’s not all about one person, we’re a big team, there are so many important personnel in the team and everyone needs to be able to work together. So I really agree that whatever he does, I just hope he makes a decision what he really wants to do and it makes him happy.

“That’s it, that’s what life’s all about: only do things that make you happy, follow your dreams. But of course, it would be a shame to see him go. I have no idea, to be honest, what’s happening in the background.

“I’m just focusing on driving and yes, I would definitely sign with the team even though Toto wasn’t here because, as Lewis said, it’s not about one person but [he’s a] very important man.”