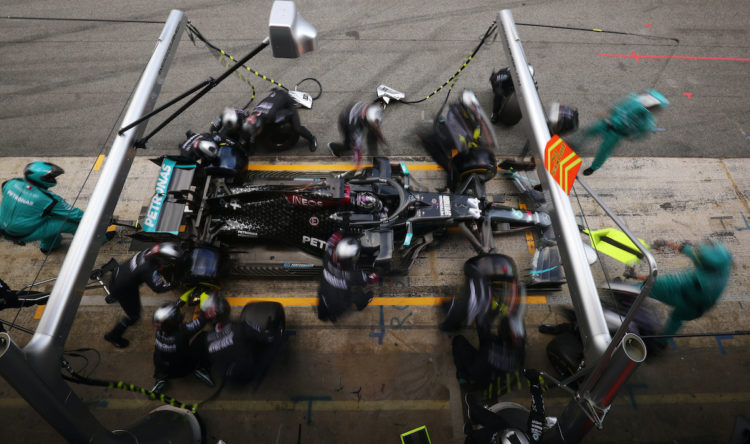 Mercedes chief strategist James Vowles has warned it’s “unlikely” the team has solved the tyre issues they encountered at the British and 70th Anniversary grands prix, despite a strong showing in Spain last weekend.

Mercedes suffered a double tyre failure at the first Silverstone race after they pushed the tyres to the absolute limit, whilst during the following weekend they suffered from heavy blistering, which saw Red Bull’s Max Verstappen snatch the victory as he was able to better manager his tyres.

The Brackley-based outfit were concerned the issues would be repeated in Barcelona where temperatures were once again high, but the team enjoyed a far smoother weekend as Lewis Hamilton took a comfortable victory, lapping everyone up to third place.

Vowles insists that, despite the analysis they carried out between the races to address the problem, it’s unlikely they’ve solved their tyre struggles and says further work needs to be done.

“Following every Grand Prix, we do an in-depth review of all of our elements, be it strategy, aero, tyres, set-up. We ensure that we understand and take away what we can as lessons so we can apply them immediately to the following Grand Prix,” he explained.

“Clearly following Silverstone, there was a lot of focus on the tyre, the tyre management and the overheating that we experienced during the course of that race including the blistering. We had but a few days to get on top of this and clearly you are not going to change the car dramatically between those two events.”

Vowles added that under the timeframe there is little they can do in terms up updates, other than tweaking their set-up and tyre management, which seems to have helped.

“Barcelona is slightly different, it’s a higher downforce track, we run a bigger wing than we do at Silverstone, but other than that you are not going to fundamentally change the design of the car. So, you work with what you have, which is set-up and management.

“I’m happy to say that the incredible work that was done over those, really just a few days, really paid off during the course of the race.

“Now, the reality is, are the problems fixed? It’s unlikely.

“The situation that happened at Silverstone is different to what we had in Barcelona. We have to keep learning; we have to keep improving. But what I’m happy to report is that the conditions we had in Barcelona were some of the most difficult this year. It was as warm, it was as sweltering on track and the reality behind that is, we performed well in those conditions, and we need to keep improving and moving forward.”