Leclerc drove two laps ‘with no seatbelt’ after spin 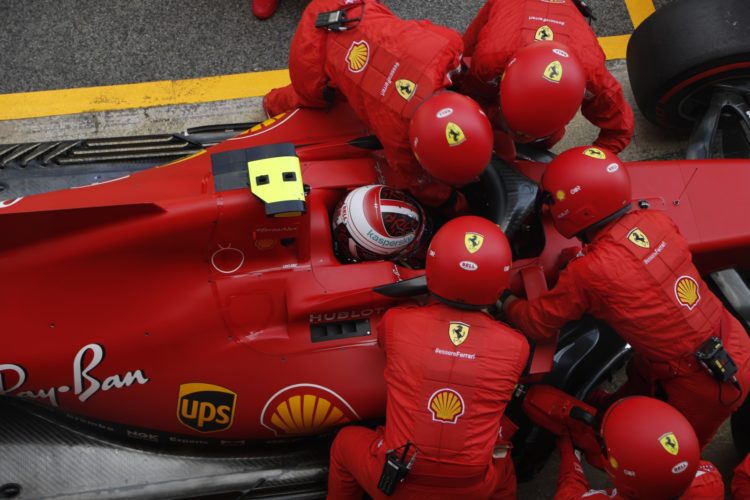 Charles Leclerc drove two laps of Formula 1’s Spanish Grand Prix with loose seatbelts in the wake of the engine issue that caused his spin.

Leclerc was in the mid-pack when he spun through the chicane on lap 36 due to an electrical issue.

Leclerc eventually restarted the SF1000 and re-joined the race at the back of the 20-car field, though quickly radioed Race Engineer Xavier Marcos Padros that “something is wrong,” before being told that Ferrari’s data showed all was in order.

However as he began lap 38 Leclerc came on the radio once more.

“Guys we need to box,” he said. “We need to box. When I went for the button to switch the car on again my seatbelts are off now so when I brake I’m moving quite a bit. I don’t mind but I’m pretty sure nobody would be happy me driving without seatbelts.”

Leclerc was told “we will try to fix it” and came into the pits at the end of the lap, with mechanics tending to the cockpit of his SF1000.

“But Xavi I told you to prepare another attach… we need another attach I mean I don’t have the attach, it flew off,” he said, while sat stationary in the box.

The call was eventually made to switch off the car and abandon the race.

Ferrari’s post-race press release confirmed that Leclerc “managed to restart the car, but by then he had undone his seatbelts and had to pit to have them retightened.

“At this point his race was more or less over, so the team decided to retire him.”

Speaking about his race, Leclerc said: “Unfortunately, we had an issue around mid-race. Suddenly my screen and engine switched off and the rear wheels locked.

“We are not yet sure what happened and are investigating the cause.

“The car eventually started up again, but it was already too late to continue because I had undone my seatbelts and had to return to the pits.

“Although this year is a little bit tougher than last, we are all motivated to bring home the best results possible for the team and we will keep working hard to achieve this.”