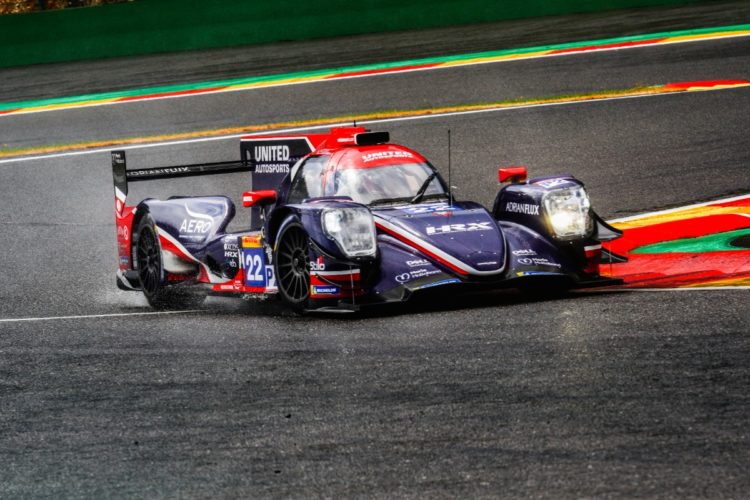 Filipe Albuquerque says the current streak of momentum United Autosports is enjoying is ‘kind of ridiculous’ after taking a third straight WEC win at the Total 6 Hours of Spa-Francorchamps.

Albuquerque, Phil Hanson and Paul di Resta won the LMP2 race from pole in the #22 ORECA 07-Gibson after surpassing the #29 Racing Team Nederland ORECA 07-Gibson in the closing hours of the race.

It marked the third win in a row for the Anglo-American squad in the WEC, which also took victories at the 8 Hours of Bahrain and Lone Star Le Mans. In addition, the pairing of Albuquerque and Hanson took its second Spa win in a row, having also won the ELMS round the week before.

“It’s kind of ridiculous the momentum United, Phil and I have at the moment, along with Paul in the WEC,” said Albuquerque. “It’s nice to remember the beginning of United’s LMP2 programme and how it was a hard fight back then and now we are just completely riding the wave with three wins in a row in WEC and two wins in a row at Spa and leading both the ELMS and WEC championships.

Albuquerque praised his ELMS partner, who at 21 years of age is by far the youngest driver in the team’s line-up.

“There is a lot of dedication and evolution from Phil,” the Portuguese driver continued. “Obviously, no one does it alone, and a big congratulations to the whole team because we are enjoying the moment and we want more of course.”

“The biggest one is Le Mans. We need to keep focused for that because the past is the past and we always need to improve.”

Since retiring from the WEC season opener at Silverstone, the #22 ORECA has not finished off the podium, also scoring a pair of third places at Fuji and Shanghai.

“This is slightly unbelievable,” commented Richard Dean. “I don’t know if we are elated or a little bit stunned with the run we are on at the moment.

“We definitely can’t get complacent. We have been in this business long enough to know these runs don’t happen very often and don’t last so we have got to keep working hard at it but also enjoy it while we can.”