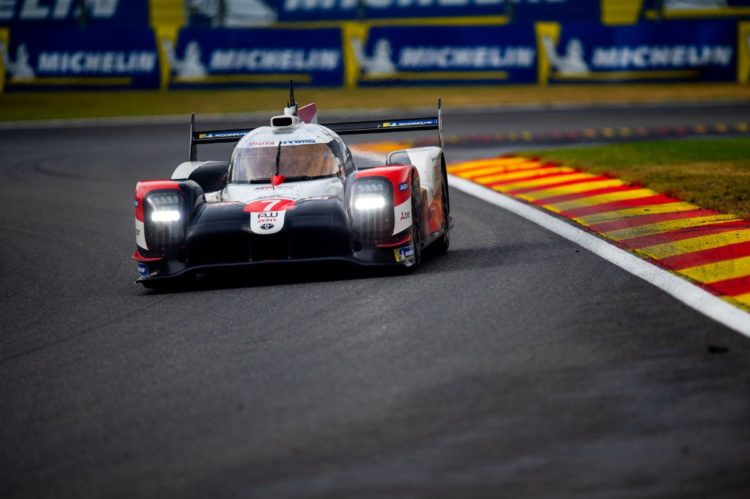 Mike Conway, Kamui Kobayashi and Jose Maria Lopez have won the Total Six Hours of Spa-Francorchamps, leading a Toyota one-two in a race that saw the safety car out on track four times.

The first WEC race since Lone Star Le Mans in February got underway behind the safety car after heavy rain hit the track before the race, which caused several cars to spin out on the way to the grid.

Once the race got underway, the field spent four laps behind the safety car. Norman Nato brought the field to the green flag, but was almost immediately swamped by the pair of Toyotas as the #1 Rebellion R13-Gibson greatly struggled in the wet conditions.

Sebastien Buemi took the lead of the race in the #8 Toyota TS050 Hybrid and led despite a brief mechanical issue, but lost the lead when he remained on wets on a drying track when Paul Dalla Lana beached the #98 Aston Martin Vantage AMR in the gravel, bringing out a second safety car.

This promoted Mike Conway into the lead in the #7 Toyota TS050 Hybrid, which was a lead that the leading Toyota would not relinquish, especially when the #8 Toyota was struck with more mechanical gremlins, costing it valuable time to the sister car.

Nato, Gustavo Menezes and Bruno Senna were able to recover to third for Rebellion, while ByKolles experienced a difficult race.

The Austrian squad encountered multiple mechanical issues which included a broken exhaust in the second half of the race. The #4 ENSO CLM P1/01-Gibson, driven by Oliver James Webb, Tom Dillmann and Bruno Spengler finished second-to-last overall, 17 laps down on the winning Toyota.

Paul di Resta, Filipe Albuquerque and Phil Hanson have taken their third consecutive WEC win in LMP2 for United Autosports in a thrilling LMP2 duel that saw Racing Team Nederland charges from last on the grid to finish third.

Van der Garde retained the lead even as a third safety car came as rainstorms once again struck the Ardennes circuit, handing over to Job van Uitert who maintained the yellow prototype’s advantage until handing over to bronze-rated Frits van Eerd in the fifth hour.

Van Eerd began losing ground quickly to United’s Paul di Resta and Signatech Alpine’s Thomas Laurent, who were engaged in a fierce battle that saw the pair go through Eau Rouge-Raidillon side by side on Di Resta’s out lap. Di Resta ultimately passed Laurent and chased down Van Eerd to reclaim the race lead.

When Laurent then tried to take second place from Van Eerd at Blanchimont, the Dutchman, whose sight was blocked by the Red River Sport GTE AM Ferrari, squeezed Laurent onto the left side grass.

The Frenchman lost control of the #36 Alpine A470-Gibson and spun across the track before violently colliding with the barrier, flipping the car on its side and bringing out a fourth safety car. Laurent was able to walk away from the crash under his own power.

After the restart, Di Resta comfortably held on to take victory, while the #42 Cool Racing ORECA 07-Gibson of Nicolas Lapierre, Antonin Borga and Alexandre Coigny took a late second thanks to a charge from Lapierre and a late stop for Racing Team Nederland to allow Van Eerd to make way for Giedo van der Garde. The Dutch squad went on to finish third, their first podium since the Six Hours of Fuji in October.

Kevin Estre and Michael Christensen have taken their first win of the season in the #92 Porsche 911 RSR-19, coming out on top in a tight fight with Aston Martin.

The two AF Corse Ferraris initially appeared to have the upper hand in the wet conditions, but as the track dried out, they quickly dropped off the pace, promoting Aston Martin and Porsche to the front of the GTE Pro field.

The #95 Aston Martin Vantage AMR of Nicki Thiim and Marco Sorensen did well to recover from an earlier puncture to charge back up the field and took the lead of the race at the end of the fourth hour when Christensen locked up at Les Combes, but after the final safety car, the #97 Aston Martin of Alex Lynn and Maxime Martin was promoted into the lead.

Estre, back behind the wheel of the Porsche, put the pressure on Martin and won out when the Belgian shot wide at La Source, allowing Estre to take the lead. A strategy battle then unfolded, with the top three cars saving fuel to try and prevent an additional fuel stop.

Martin was forced to splash and dash minutes before the end but held on to third, while Christensen and Estre took the chequered flag ahead of Thiim and Sorensen in second place. James Calado and Alessandro Pier Guidi finished fourth in the #51 Porsche 911 RSR-19, ahead of the second Porsche of Gianmaria Bruni and Richard Lietz and Miguel Molina and Davide Rigon in the #71 Ferrari.

The trio won a tight and difficult to predict fight in class, coming out on top ahead of the polesitting #77 Dempsey-Proton Racing Porsche 911 RSR of Christian Ried, Riccardo Pera and Matt Campbell.

TF Sport struggled greatly in the wet conditions but were able to pick up the pace once conditions improved, resulting in a third place finish for the #90 TF Sport Aston Martin Vantage AMR driven by Salih Yoluc, Jonny Adam and Charlie Eastwood.