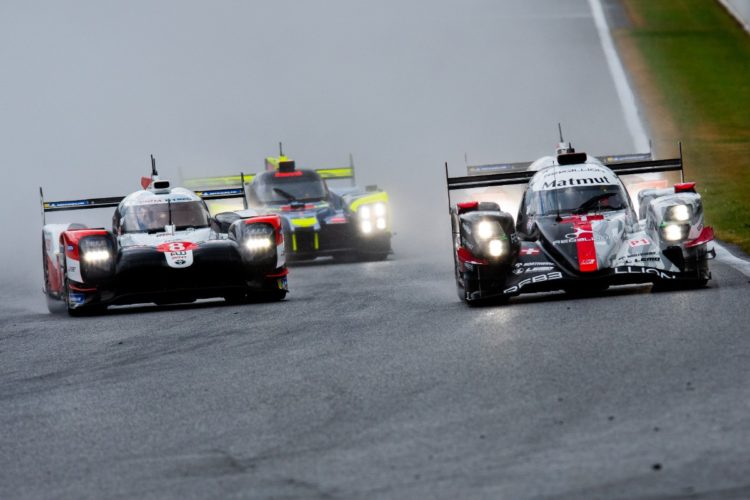 With two hours done in the Total Six Hours of Spa-Francorchamps, Kamui Kobayashi leads Brendon Hartley in a one-two for Toyota Gazoo Racing.

The #8 Toyota led in the opening phase of the race, but Sebastien Buemi critically remained out on wets when the track dried up and lost the lead when he came in after a safety car to pit for slicks later than the sister car.

This promoted the #7 Toyota TS050 Hybrid, now in the hands of Kobayashi, to the lead ahead of the #8 of Hartley.

Tom Dillmann sits in third in #4 ByKolles ENSO CLM P1/01-Gibson, ahead of the #1 Rebellion R13-Gibson of Gustavo Menezes.

In LMP2, Giedo van der Garde has seized the lead in the #29 Racing Team Nederland ORECA 07-Gibson after a remarkable opening stint, which saw the Dutchman start at the very back of the grid. The ex-F1 driver then made his way up the order before winning a thrilling battle with the #22 United Autosports ORECA 07-Gibson of Filipe Albuquerque.

GTE Pro is being led by Alessandro Pier Guidi’s #51 Ferrari 488 GTE Evo as the rain returned, the Italian surpassing the #92 Porsche 911 RSR-19 before Michael Christensen took the car over from Kevin Estre.

Christensen was then passed by Alex Lynn for second place once Lynn had taken the #97 Aston Martin Vantage AMR over from Maxime Martin. The sister Aston Martin suffered a puncture in the hands of Marco Sorensen.

In GTE Am, Team Project 1 leads an entertaining battle, with the #56 Porsche 911 RSR of Matteo Cairoli currently up front. The Italian took over from Egidio Perfetti, who opened the race in the white-and-blue Porsche.