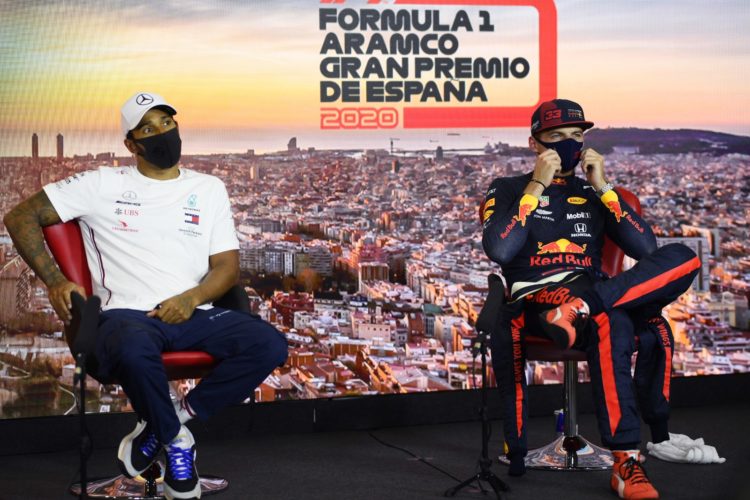 Lewis Hamilton says Mercedes must be wary of the threat posed by Max Verstappen at Formula 1’s Spanish Grand Prix, in spite of the pace difference in qualifying trim.

Mercedes dominated qualifying to maintain its unbeaten run on a Saturday in 2020, with Hamilton eclipsing Valtteri Bottas by just 0.059s.

Verstappen had been Mercedes’ primary challenger throughout practice and converted that form in Q3 to finish third, albeit over seven-tenths behind Hamilton.

But Hamilton says Verstappen will be a threat in Sunday’s 66-lap grand prix.

“It’s definitely been a good Saturday, I’m smiling under this [mask]” said Hamilton.

“I think [Bottas] is keeping me honest, it’s very close between us, so every millisecond counts

“Tomorrow is going to be tough as when we get to the race the scenario is different.

“I think over a single lap we seem to have the edge over the Red Bulls but I think this weekend we’re pretty much on par when it comes to race pace so it’s going to be a tough battle with Max tomorrow.”

Hamilton is nonetheless optimistic that Mercedes will not encounter the tyre blistering that compromised its potential in the race at Silverstone last week.

“I expect these guys [Red Bull] to be probably a little bit better, I would imagine. It’s definitely not going to be easy for us.

“I don’t think we’ll have the same problems we had last week, obviously we’ll find out in the race.

“We’ve got those hot conditions but we have a harder compound so fingers crossed that helps. But yeah I wouldn’t put it past us having problems tomorrow but we’ll wait and see.”