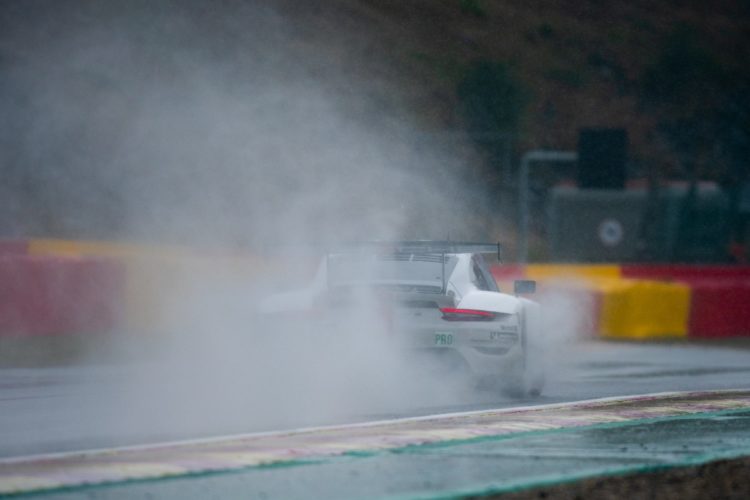 With two hours remaining in the Spa 6H, the battle for the lead in GTE Pro heats up while Toyota continues to comfortably lead overall.

Porsche and Aston Martin are battling away for the lead in class, with Nicki Thiim taking the lead in the #95 Aston Martin Vantage AMR at the end of the fourth hour after Michael Christensen locked up in the #92 Porsche 911 RSR-19, going wide at Les Combes and losing the lead to his compatriot.

The #51 Ferrari 488 GTE Evo, still driven by Alessandro Pier Guidi, showed strong pace in the wet conditions, but as the track dried out has dropped away in third place. The Italian has been in the car since the start, yet to hand over to James Calado.

In the overall lead battle, Jose Maria Lopez continues to lead in the #7 Toyota TS050 Hybrid, well clear of the #8, currently in the hands of Kazuki Nakajima. The second Toyota suffered an issue after a third safety car restart for heavy rain, which cost the championship leading car significant time.

Gustavo Menezes still runs third in the #1 Rebellion R13-Gibson, while Oliver James Webb is fourth in class but fifth overall in the #4 ByKolles ENSO CLM P1/01-Gibson as the Austrian crew battles electrical gremlins.

In LMP2, Racing Team Nederland continues to lead despite a five second stop-and-hold penalty for overtaking outside track limits. Job van Uitert is behind the wheel of the #29 ORECA 07-Gibson, but bronze-rated Frits van Eerd is gearing up to take over.

Second place in LMP2 has changed hands, as Thomas Laurent took over second place at the turn of the hour, with the #36 Alpine A470 Gibson now in second ahead of United Autosports’ Phil Hanson.

GTE Am continues to be unpredictable, with the lead changing hands frequently. Nicklas Nielsen currently leads in the #83 Ferrari 488 GTE Evo.

Fraga is still second in class, but Matt Campbell in the #77 Dempsey-Proton Racing Porsche 911 RSR is in third and closing the gap.