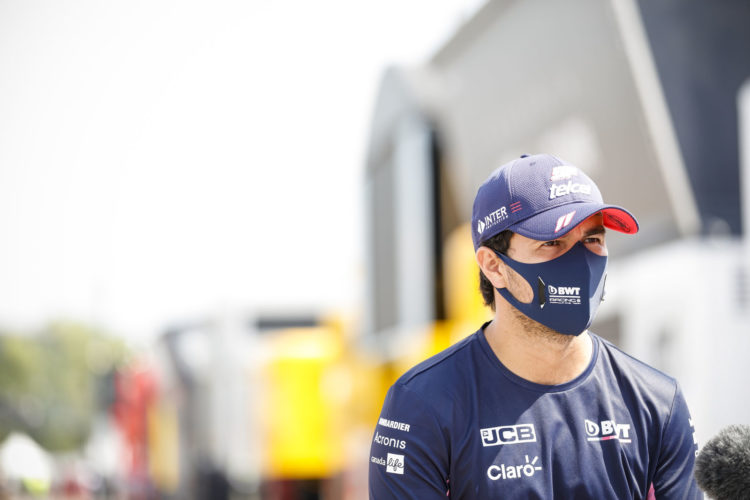 Sergio Perez has hit out at “unprofessional” reports and “made up stories” surrounding his positive Covid-19 test, as he returned to the paddock on Thursday.

Perez tested positive for the Covid-19 coronavirus during the build-up to the British Grand Prix and missed the 70th Anniversary Grand Prix after returning another positive test.

Perez clarified that he had returned to his native Mexico between events in Hungary and Britain in order to visit his unwell mother, and followed all of the guidelines laid out by the FIA.

Speculation in some media outlets, and on social media, suggested that Perez had also met with his sponsors and backers, and had also been seen with fans.

After receiving clearance to return to the paddock on Thursday Perez, in an interview with the official Formula 1 channel, hit out at the situation.

“I found it very unprofessional, those things,” he said. “It’s a total lie. I went to Mexico for two days to see my mum, with all the precautions in place. I took care of everything, followed all the guidelines.

“When I was in quarantine I saw everything, I saw people saying I was taking with selfies with people, I saw that I made up the story about my mum, so much bullshit. So unrespectful.

“People here in Formula One think we are bulletproof to the virus, and that’s not the case. We’re all very vulnerable to this. I’ve done nothing differently to anyone else in this paddock. It just happened to me.

“It happened to another friend in another team, when I was in quarantine he called me and said ‘look, I tested positive too’. It can just happen to anyone.

“What cannot happen is that if tomorrow someone else infected that people make up stories instead of being worried about their health.”

“I finished my quarantine in the UK [and] I was free to go. But for Formula 1 I had to be negative. In some other sports they clear you up.”