Mercedes: ‘We’ll be in trouble’ in Spain if we can’t solve tyre issues 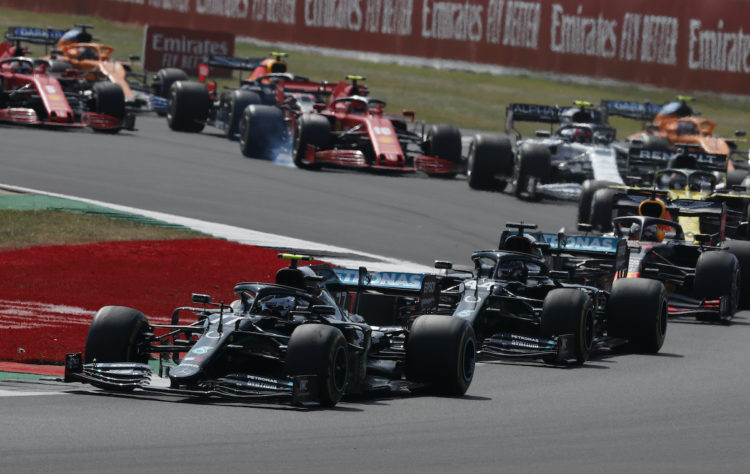 Mercedes “will be in trouble” at this weekend’s Spanish Grand Prix if they can’t quickly understand their tyre problem, according to chief race engineer Andrew Shovlin.

Although Mercedes looked unbeatable at the opening three races, taking comfortable victories in Austria, Styria and Hungary, they almost lost out in Britain as tyre failures hit both cars, forcing Lewis Hamilton to cross the line on just three wheels.

Tyres were again the talking point a week later as both Mercedes cars suffered from heavy blistering on the hard (C2) and medium (C3) compounds, whereas race winner Max Verstappen looked to have far lower degradation and was able to beat Mercedes on outright pace.

This weekend’s Spanish GP will have the same compound choice as the British GP – the C1, C2 and C3 – which Shovlin says will allow Mercedes to “hide” from the problems it experienced at the 70th Anniversary race, but is still wary that they will have to run the C2 compound during the race in similar conditions.

“There’s an element of urgency because we’re flying out there on Tuesday, running on Friday, it’s forecast to be 30C, the track will be a bit like this. It’s a high energy circuit,” explained Shovlin.

“If we don’t solve it, you can probably hide from it [the issue] a little bit on that C1 tyre, but we’ve still got to run the tyre that was causing us grief.

“We’re kind of well aware that if we didn’t get on top of it, we’ve got another Sunday of looking silly.

“We’ve seen Red Bull, they’re not that far off us in races, even when we’re looking at our best so to be honest, if we don’t make progress, we’ll be in trouble [in Spain] as well, so that’s kind of where this urgency to get a bit of a grip on it comes from.”

With very little time to find a fix and them implement it, Shovlin admitted it wouldn’t be straightforward, especially given their 2019 car suffered from the same problem to a slightly lesser extent, and they still don’t understand why.

“This year’s car is, by and large, an evolution of last year’s car,” he added. “There’s not any areas where we’ve really changed philosophy, we’ve just been pushing down the same paths for development.

“Right now, we don’t understand what the problem is.”