From the carnival to Mercedes’ nearest challenger 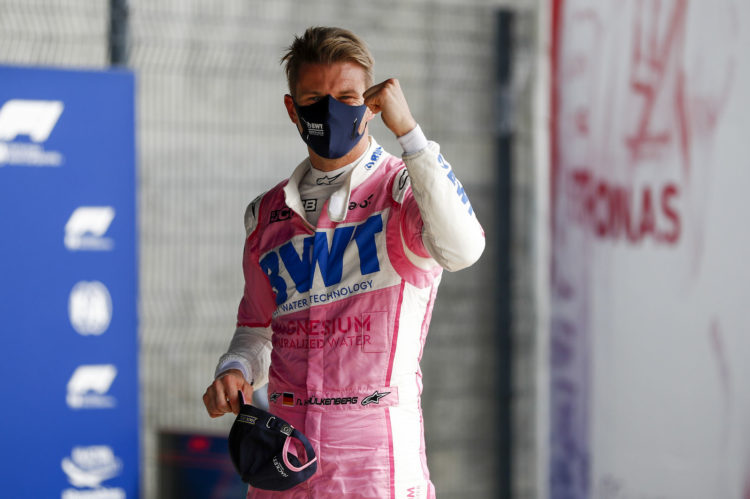 When Formula 1 teams turned up at pre-season testing in February Nico Hulkenberg was a free agent for the first time since the 2000s.

Hulkenberg’s hiatus from the grid was unwanted from the German’s perspective, having been let go by Renault, and missed out on potential opportunities at Alfa Romeo and Haas.

Instead of pounding around Spain’s Circuit de Barcelona-Catalunya he took a trip to Rio de Janeiro’s carnival in February – but five months on he finds himself back in Formula 1, albeit temporarily, and third on the grid for the 70th Anniversary Grand Prix.

Hulkenberg is again filling in for Sergio Perez at Racing Point, following his positive Covid-19 test, and on Saturday at Silverstone he excelled.

Hulkenberg split the Mercedes drivers in Q2, having needed a second push lap after a wide moment through Chapel curve, and then in Q3 finished third, behind only Valtteri Bottas and Lewis Hamilton.

“It’s been a  crazy last week, or seven or eight days or whatever it is now,” he said.

“Obviously last week a big high to come back and then the low on Sunday, so very extreme.

“This weekend I felt much better in the car, much more prepared. Qualifying was still tricky. In Q2 I made life hard for myself a bit and I was scared that I had damaged the car and then Q3, was just head down, full beans, whatever I had.

Hulkenberg has famously never taken a podium finish across a 177-race career that has encompassed stints at Williams, Sauber, Renault and Racing Point’s predecessor Force India.

However he is braced for a difficult grand prix as he prepares for his first start since last December’s 2019 season finale in Abu Dhabi.

“I know I have a fast car beneath me,” he said.

“So it’s just trying to make sure to do everything right. Obviously it’s starting lap one. It’s going to be also new for me but I think I’ll just try to get it right with all the experience that I have and then we’ll race.

“Obviously a couple of races behind the other guys but I still remember what it feels like. Just try not to think too much, keep my head down and have a good race tomorrow.”