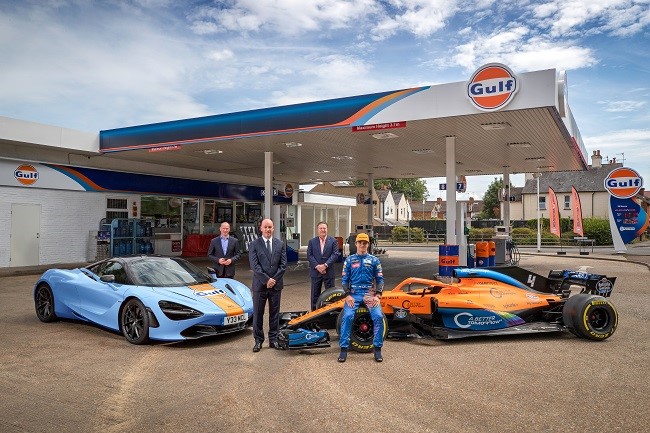 McLaren has confirmed a new multi-year partnership with Gulf, with branding to appear on the squad’s MCL35 from this weekend’s Formula 1 British Grand Prix.

McLaren and Gulf previously partnered in Formula 1 and Can-Am in the 1970s and then again at the Le Mans 24 Hours in the 1990s.

The new arrangement also covers McLaren Automotive, with Gulf becoming the preferred oils and lubricants supplier to the company’s sportscars from 2021.

Gulf’s logo will be present on the MCL35’s engine covers and wing mirrors, and on McLaren’s team wear, from the upcoming fourth round of the 2020 Formula 1 campaign at Silverstone.

McLaren’s 2020 Formula 1 car already runs in the orange-and-blue colours with which Gulf is associated.

“We’re delighted to welcome Gulf back to McLaren and reunite two iconic brands back together in a new and exciting partnership,” said McLaren CEO Zak Brown.

“Gulf is part of McLaren’s history and are well-known for their innovation and technical excellence in the industry, with which aligns with McLaren perfectly.

“We are looking forward to starting our partnership together this season.”

McLaren has enjoyed a strong start to the 2020 campaign, holding third in the Constructors’ Championship, having taken a podium finish in Austria.