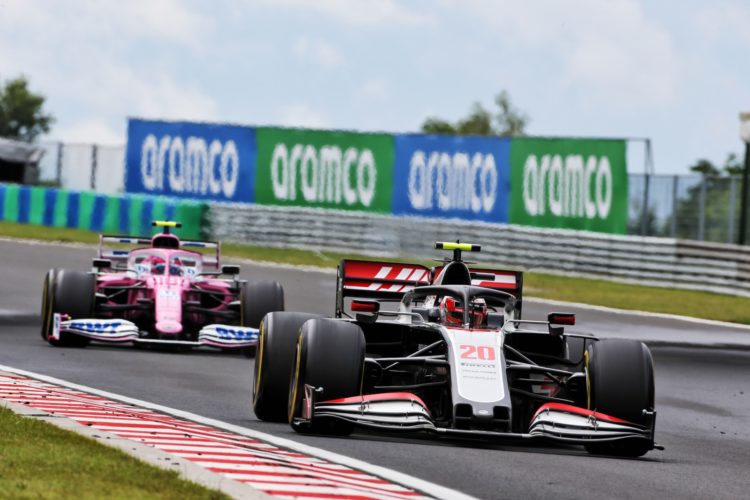 Kevin Magnussen says Haas made an “amazing” pre-race call for slick tyres and praised the team for its faith in him, after he picked up a point at the Hungarian Grand Prix.

Magnussen was due to start from 16th at the Hungaroring, with Haas team-mate Romain Grosjean 18th, but both were called in at the end of a damp formation lap to take on dry-weather tyres.

The pair emerged at the rear of the field but as rivals pitted they cycled forwards to third and fourth respectively.

Grosjean dropped out of the points, having been hampered by sustaining wing damage when passed by Alexander Albon, but Magnussen held on to classify ninth.

That later became 10th when he – and Grosjean – were handed 10-second time penalties after stewards deemed that Haas had been in breach of the regulations by telling them to pit on the formation lap.

“I started from the pit lane and after a few laps I was P3 and fully in the race! I knew P3 wasn’t for us but it was amazing to be there, and I thought I’ll hang on to it as much as I can.

“I was trying to judge where I might be able to hang on as there’s no point trying to hang on to P3 or P4 as I’d lose too much time.

“Eventually it was P9, I opened a gap to a Ferrari – who would have thought that – and I was able to keep a McLaren away.

“It just shows what a good car we have in the race and it proves that the team has done an amazing job even though we’re struggling a bit in qualifying we are strong and we can do good races.”

Magnussen’s point was his and Haas’ first of the year, ending an absence from the top 10 that stretched back to last year’s Russian Grand Prix.