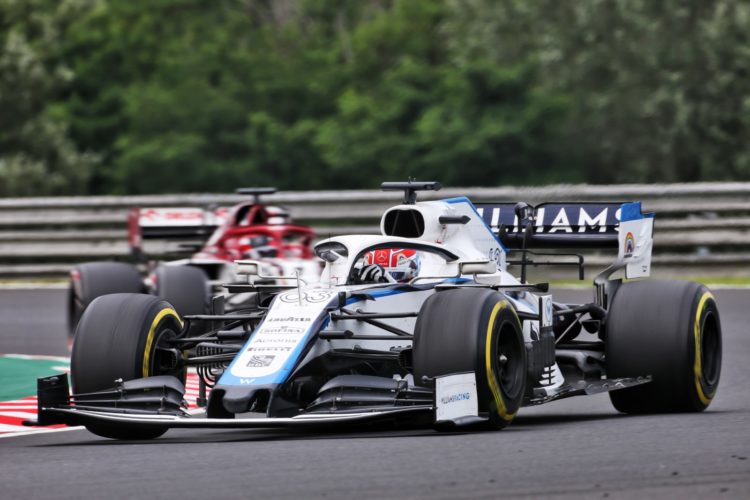 George Russell believes that Williams’ race pace is strong but that the high sensitivity of the FW43 makes it “very difficult to control” when following opponents.

Russell secured a spot in Q2 for the second successive event while team-mate Nicholas Latifi also made it through the first knockout segment of qualifying at the Hungarian Grand Prix.

It marked the first time since the 2018 Italian Grand Prix that both Williams drivers made it through to Q2.

But in the race Russell dropped down the order early on and eventually came home in 18th position.

With Haas finishing in the top 10 courtesy of Kevin Magnussen it leaves Williams as the only team yet to score in 2020.

“That had not been the case last year. Last year our race pace was better than our qualifying pace.

“That’s the only understanding we think we can take away from this.

“I feel like I just lose quite a lot of downforce and the car becomes quite unpredictable.

“The car’s very strong and feels really nice to drive in a qualifying format, but just in the race when following cars it isn’t.

“It takes confidence away from me and when I’m in clear air in the race our pace is strong, or during a practice session in clear air with high fuel the pace is strong, so all things are pointing towards or indicating it’s when we are following and our aero sensitivity is too high.”

Russell cautioned that Williams’ performance is unlikely to drastically improve in the short-term.

“I think on paper Hungary is going to be the circuit that suits us most and our car characteristics most,” he said.

“I think that was proven in qualifying. I think our performance in Austria qualifying round one was probably the true pace of the car in a dry condition, obviously race two was wet and things were all mixed up so ultimately I think our goal and our realistic competitors are the Alfas and the Haas and fighting to get into Q2 following on from these three events.”