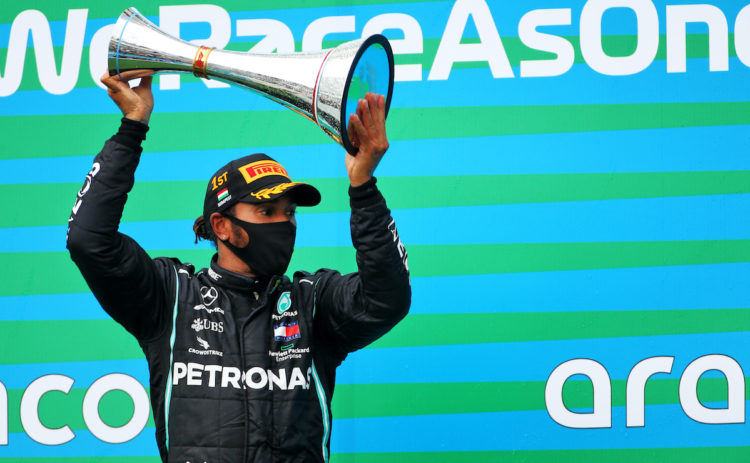 Lewis Hamilton took his eighth victory in Hungary as he simply dominated the 20-car field, with the win and point for fastest lap moving him to the head of the points standings.

The win matches Michael Schumacher’s record for the most wins at one circuit – the German achieving eight French GP wins.

Max Verstappen managed to hold onto second place, all this despite crashing on his way to the grid, which broke his front-wing, nose and suspension. Thankfully his Red Bull crew completed the repairs with just seconds to go.

The Dutchman came under pressure from a chasing Valtteri Bottas, who finished just 0.750s adrift in third. The Finn endured a terrible start, initially jumping the lights before stopping, but fell down the order as a result.

The race began under wet conditions with all but Magnussen starting on intermediate tyres. The Haas driver had opted for full wets, but he and team-mate Romain Grosjean quickly changed their mind and after the formation lap dived into the pits for slicks.

They would start from the pitlane, but it was a genius strategic call as just a few laps into the race, the entire field made the same move, promoting Magnussen and Grosjean to third and fourth respectively.

It wasn’t to last though as their race pace simply couldn’t keep them ahead of quicker cars, though Magnussen did a good job of staying inside the top three before finally relinquishing the position and dropped back as the race went on.

They finished ninth and 15th, with Magnussen at least scoring the teams first points of 2020, with Williams now the sole non scorers.

Bottas wasn’t the only driver to get a bad start. Fourth-place on the grid Sergio Perez also dropped back, ending up seventh on the opening lap.

That was to the benefit of Verstappen and the Ferraris. The Red Bull was up to third from seventh, whilst Sebastian Vettel jumped up to fourth, with Charles Leclerc fifth.

Lance Stroll held second for Racing Point but was later jumped by Verstappen and then Bottas, but took a solid fourth place in another impressive race for the Silverstone squad.

A race of one

Hamilton could do no wrong as he posted fastest lap, lap after lap to open a 28-second gap to Verstappen in second, with it only cut when he made a late stop on Lap 67 or 70 for fresh tyres.

The Briton then posted the fastest lap of the race on the final lap to secure the extra championship points to cement his place at the head of the standings with back-to-back victories.

What of the others?

It was a better weekend for Alexander Albon, having started down in 13th – he went on to finish fifth after some daring overtakes, though still lacked the pace of his team-mate, finishing a lap down.

Vettel finished sixth for his biggest points haul so far, with Perez seventh.

Penalties were handed out to Kimi Raikkonen for being out of position on the grid, whilst Nicholas Latifi also took a five-second penalty for an unsafe release when he pulled out into the path of Sainz, causing a puncture which forced him into a spin – one of two for the Canadian.