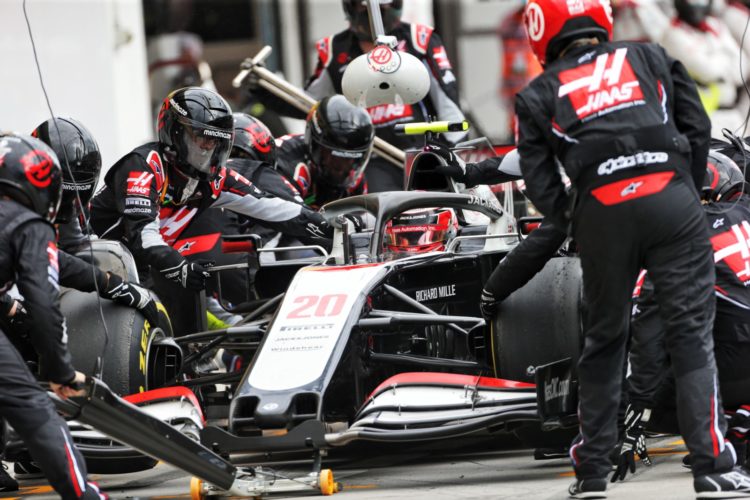 Kevin Magnussen and Romain Grosjean have been hit with 10-second time penalties after Haas instructed the drivers to pit on the formation lap at Formula 1’s Hungarian Grand Prix.

Magnussen was set to start the race on Wet tyres, with Grosjean on Intermediates, after a rain shower struck the Hungaroring on Sunday afternoon.

Haas opted to bring both drivers in at the end of the formation lap, putting them onto Medium tyres, and they started the race from the end of the pit lane.

As rivals pitted in the opening laps Magnussen rose to third, with Grosjean fourth.

Magnussen held on to a points-paying position by classifying in ninth while Grosjean slipped to 15th at the chequered flag.

Post-race Haas was summoned for contravening Article 27.1 of the Sporting Regulations, which states that the driver “must drive the car alone and unaided.”

The stewards determined that “the team instructed the driver[s] to pit” and that Haas was unable to prove it was on a list of exemptions made under a Technical Directive.

As a result the drivers were issued with post-race 10-second time penalties.

Magnussen drops behind Carlos Sainz Jr. to 10th but nonetheless still picks up Haas’ first point of the year, while Grosjean falls to 16th position.

“There was a Technical Directive that came out I think in 2017 clarifying what communication the team can make to the drivers on the formation lap, which relates to Article 27.1 of the sporting regulations, which is that the driver must drive the car alone and unaided,” he said.

“And the essence of that summons is that both drivers were called in by their engineers to change tyres on the formation lap, which is not permitted within that Technical Directive which was issued at the time, and in essential terms the only communication that can be made with the driver during the formation lap, from the pit wall to the driver, is for safety matters. If it’s an issue of imminent safety then that communication can take place.”