Technical Insight: Will Ferrari switch to a narrow nose like its rivals?

There is still a rumor that Ferrari can introduce a sort of real version B of the SF1000 to Budapest, making changes in the technical philosophy of the Ferrari 2020 project, with the possible introduction of a new narrow nose. 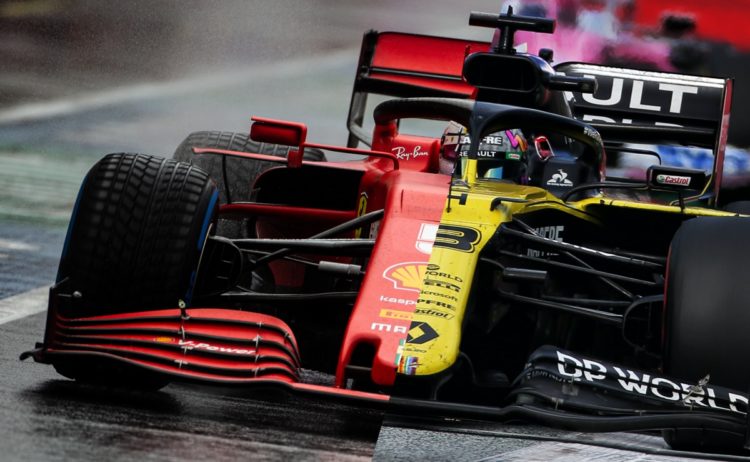 The Ferrari SF1000 seen at the first two races of the 2020 Formula 1 season at the Red Bull Ring has largely disappointed.

Despite the second place obtained by Charles Leclerc in the first race, it’s clear the Ferrari suffers from a lack of straight-line speed, but is also difficult and unstable to drive.

Some updates were introduced for the second event in Spielberg (a new front-wing and floor), these were originally planned as part of a larger upgrade package destined for Hungary, but these two parts were fast-tracked.

In the drawing below we can observe the changes to the floor carried for the Styrian Grand Prix, which not only serves to improve the aerodynamic efficiency of the SF1000, but also to make the car more drivable at the rear.

There is still a rumour that Ferrari will introduce a ‘B’ version of the SF1000 in Budapest, making major changes to the technical philosophy of the SF1000, with the possible introduction of a new narrow nose.

The rumour that Ferrari has to introduce the narrower nose has been around for years now, but more so this season as many teams have changed their philosophy compared to 2019, moving from the wider nose to the narrow, rounded version.

This is a concept that has been adopted by the majority of the grid including Red Bull, Mercedes and Renault. Below we see a direct comparison between the nose of the Ferrari SF1000 which is the “old” in concept, with that of the Renault RS20 which is very close in concept to that of the Mercedes.

The slimmer nose was a technical solution introduced by Mercedes back in 2015, then perfected in 2017 and improved from season to season. The narrow muzzle has the advantage of reducing the overall dimensions, aiding top speed, but it also brings less airflow to the upper part of the frame.

Together with the narrow nose, the support pylons of the front-wing are also much closer together, reducing the air inlet section in the lower part of the car, energising the flow for aerodynamic purposes.

The narrow nose also allows teams to adopt a large flow diverter which stems from the nose, instead of the classic turning vanes attached below, as the airflow management needs are totally different between the two concepts.

Is it therefore feasible for Ferrari to introduce a “Mercedes-style” nose?

Implementing a narrow nose on a car originally designed with a broad nose is not that simple, as it’s the first part of the car that makes contact with the airflow, it often determines the development direction of everything behind it and therefore an entirely new direction is required to make it work.

At Red Bull, Adrian Newey and his team had to work hard on the RB16 to adopt the Mercedes-style nose, revolutionising all the geometry of the front suspension to narrow the front section of the chassis. You can see how tightly packed everything is in the comparison below of the Racing Point and Red Bull.

Ferrari could switch to a concept closer to that of the Mercedes-style aerodynamic philosophy from the Hungarian GP to reduce drag, but it’s unlikely we will see such an extreme solution like that of Mercedes and Red Bull, which are cars born out of this technical philosophy.