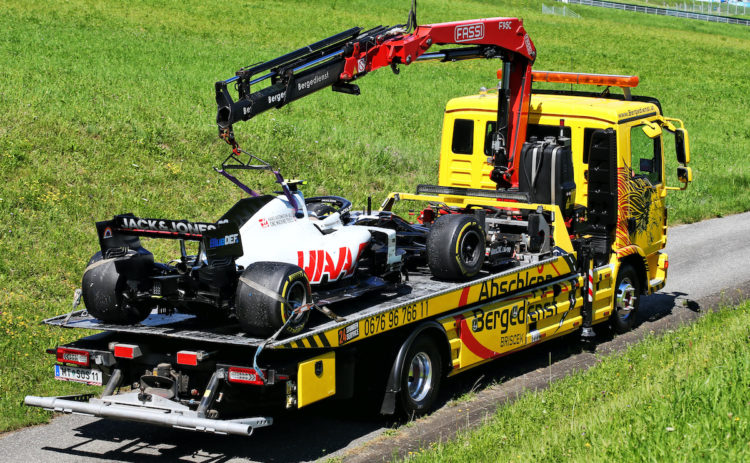 The Haas VF-20 of race retiree Kevin Magnussen (DEN) Haas F1 Team is recovered back to the pits on the back of a truck. Austrian Grand Prix, Sunday 5th July 2020. Spielberg, Austria.

Haas suffered a double brake failure during last weekend’s Austrian Grand Prix and were amongst a total of nine cars to retire from the opening race of the delayed 2020 Formula 1 season.

Austria saw high temperatures on the Sunday of the race which exacerbated Haas’ brake issues, and although cooler temperatures are expected this weekend for the Styrian GP – which will also take place at the Red Bull Ring – Haas are looking at measures to avoid a repeat of the brake issues both Romain Grosjean and Kevin Magnussen encountered.

Grosjean repeatedly ran into brake issues last year, but insists this failure isn’t related to those.

“I think it is very different from what we had in the past,” he said on Thursday. “It was temperature related and obviously our cooling has not been efficient enough, especially in traffic.”

Grosjean says the team have an “emergency step” available to them which he’s hopeful will resolve the problem.

“Yes, we’re looking at different options to get the brakes under control. It is never great starting a race knowing that you need by lap two to lift and coast to save the brakes.

“So I think the boys have been looking at as many options as they could. We have one more emergency step I believe in the pocket. But I guess tomorrow morning and afternoon we will be focused on getting those temperatures under control.”

Despite struggling in qualifying – Magnussen failed to escape Q1 and started 16th, just behind Grosjean – the pair are confident they can unlock some extra pace this weekend, despite Haas team boss Guenther Steiner confirming no upgrades will be introduced.

“This weekend could be very similar to last weekend. Except it might rain on Saturday so that might make a difference. But then we go to Hungary which is a different layout, and then Silverstone will be another one, so I think we will wait, we will see.

“What we know is that there are not any big upgrade plans on the car, some are not expecting a big step in performance in terms of the car itself. But again it was only the first weekend and we can always try to fine-tune a few things. We have ideas in mind for this weekend, and see if we can improve.

“The midfield is quite tight, which is exciting. I think, as Kevin said, two-tenths can make a world of difference here. And two-tenths, if you think about it, is not too much.

“But we will just wait and see, see if we can unlock some more potential in the car. We have made some changes on the set up and I am hopeful that they will give us a tiny bit of an advantage.”