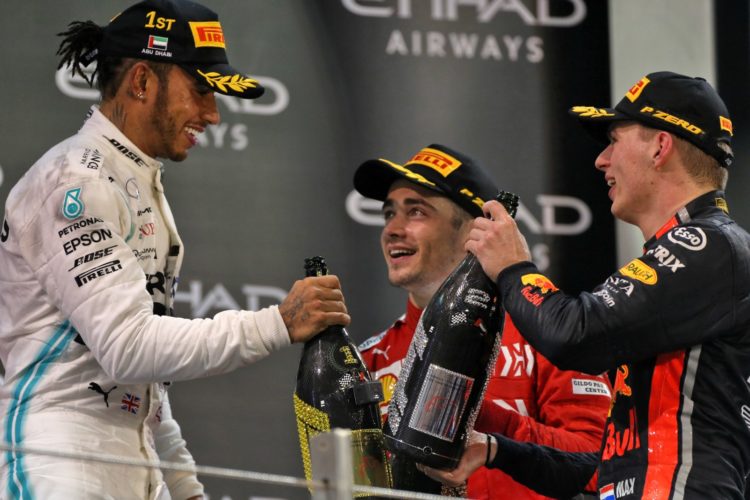 Formula 1’s traditional podium ceremonies have been scrapped for the foreseeable future due to the coronavirus pandemic.

The top three finishers from each grand prix, along with a representative from the victorious team, participate in the podium ceremony immediately after the race.

Trophies are presented by attending dignitaries before champagne is sprayed but this will not happen this year on account of social distancing and revised hygiene procedures.

Other options are currently being evaluated in order to provide as best a spectacle as possible.

“The podium procedure can’t happen, but we’re looking at doing something on the grid after the race,” Formula 1 chief Ross Brawn told the championship’s official website.

“One option would be to line the cars up on the track and the drivers will stand in front of cars.

“We can’t present the trophies, as you can’t have someone in close proximity presenting a trophy, but we have worked it out, we have plans and procedures, we’re looking at how we can present it on TV.”

It is understood that other aspects surrounding a grand prix are likely to be altered, with the pre-race grid procedure under threat, meaning drivers could begin the formation lap from their pit box.

Brawn also added that “the drivers’ parade won’t happen as we can’t put 20 drivers on the back of a truck and take it round the track, so instead we will interview with each one of them in front of the garage.

“There’s plenty of ways we can engage without compromising health and safety.

“I’m 100 per cent confident that we will make it an engaging and exciting product, it will just be different.

“This is the new norm. How long will this carry on? We don’t know, but this will be the new norm for the rest of the year for sure.”