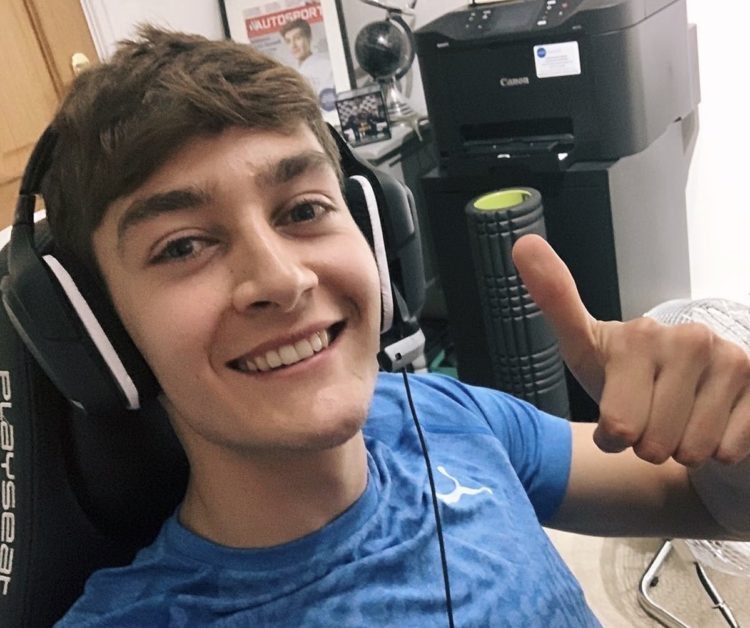 George Russell scorched to a third consecutive Formula 1 VirtualGP victory at Baku to take the championship lead from a non-scoring Charles Leclerc.

Russell-who started from pole-managed to get off the line well to consolidate his leading position into Turn 1 ahead of fellow front row starter and Brazil Virtual GP victor Alex Albon.

The Williams racer proceeded to bang in a strong first tour to open up an eight-tenth advantage over the Red Bull, before breaking out of DRS detection range by the end of the second lap.

Russell continued to edge away across the first phase of the race before Albon pitted on lap six to trade his used soft-compound tyres for a brand new set of hards.

Russell followed him in on the following tour, but decided to plump for mediums instead, emerging back onto the track with a slightly reduced lead as Albon utilised the undercut.

Albon was unable to live with the pure grip advantage Russell now enjoyed with his softer rubber, the Red Bull dropping to well over four second back as the race passed mid-distance, the Thai-British pilot hoping his longer-lasting tyres would pay dividends in the closing stages.

A second win wasn’t to be for Albon though as the expected drop off from Russell’s tyres never arrived, a three-second penalty the final nail in the coffin for Albon’s victory chances as he struggled to make any impact on the four second gap ahead.

Russell ultimately took the chequered flag 6.8 seconds clear of Albon once the penalty was applied, with Mercedes F1 tester Esteban Gutierrez completing the podium after also opting for the softer medium tyres for his second stint.

The Mexican looked to be coming under pressure from the chasing McLaren of Lando Norris, before the Brit picked up a track limits penalty of his own-ending any chance of stealing a debut VirtualGP podium from the Mercedes.

Norris therefore had to make do with fourth-albeit his best result in the series so far-ahead of Renault F1 junior racer Oscar Piastri and Pietro Fittipaldi’s Haas.

Nicholas Latifi managed to bring the second of the Williams machines home seventh ahead of YouTuber Ben Daly-also known as Tiametmarduk-while Anthony Davidson and Jimmy Broadbent completed the top ten.

Leclerc meanwhile suffered a difficult race, the Ferrari man struggling to find any speed around the 6km Baku street circuit, with 14th behind team-mate Enzo Fittipaldi little reward for his efforts.

With no points scored the Monagasque loses the title advantage to the race-winning Russell, with Albon also still in the mix following his runner-up result.

Pierre Gasly recovered from a poor start and several incidents during the 26 lap race to claim 11th, while Sergio Perez struggled for pace on his own debut outing to take 15th, having slipped from seventh on the first lap after making a lightning getaway.