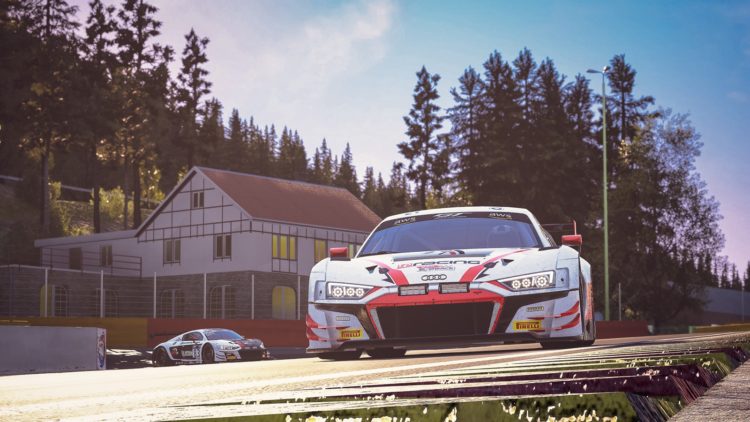 Lorenzo Marcucci has won the second round of the SRO E-Sports GT Series in dominant fashion, finishing fifteen second clear of Ivan Pareras and leading an Audi one-two at Spa-Francorchamps.

Many of the major frontrunners from the opening round of Silverstone were notably absent from the top of the timing sheets after qualifying, which was largely down to severe weight penalties for some of the top Bentley, McLaren and Mercedes-AMG runners. As a result, round 1 winner Jordan Pepper qualified 27th, while runner-up Ben Barnicoat had to make do with 22nd place.

While the opening round at Silverstone featured a notable late-race entrant in F1 star Charles Leclerc, round two had another big star join the grid in double Formula E champion Jean-Eric Vergne. Unfortunately for JEV, his efforts did not exactly go to plan. The Frenchman was disqualified early on for driving the wrong way in the pit lane, which was reportedly triggered after he had gotten stuck and tried to free his stricken car.

Marcucci took pole ahead of Pareras and led the field down into Eau Rouge in a race that was a lot cleaner than the previous round, which was much more chaotic and incident-packed. That didn’t mean there were no incidents at all. Notably, Barnicoat and Pepper were both taken out in a collision at the final chicane early on.

Raffaele Marciello, who qualified sixth in his Mercedes-AMG GT3 and was an early favorite for victory, retired from the race shortly thereafter after he was seen falling out of the top ten for unknown reasons. ‘Lello’ later explained on Twitter that he had been spun by another car.

While Marcucci extended his lead up front, Pareras moved up into second after Nicolas Hillebrand crashed his Ferrari 488 GT3 at the top of Raidillon. This allowed the Aston Martin Vantage GT 3 of round one front runner Luigi di Lorenzo to moved up to third.

Behind, the Porsche pair of Matteo Cairoli and Louis Deletraz were steadily moving up the order, running fourth and fifth before they were hunted down by the storming Lamborghini Huracan GT3 Evo of Albert Costa Balboa.

The Spaniard first chased down and eventually passed Deletraz to take fifth place before targeting Cairoli. The Porsche factory driver put up a fierce fight in his Porsche 911 GT3 R which ended in tears when Costa Balboa attempted a late dive up the inside at La Source.

The Lamborghini dove into a quickly disappearing gap and tagged the rear of the Porsche, sending it into a spin and allowing Deletraz to retake fourth in the process. Costa Balboa was penalized for the infraction, while Cairoli retired from the race.

Further up ahead, nothing could halt Marcucci’s progress and he took a dominant win ahead of Ivan Pareras and Luigi di Lorenzo. Deletraz finished fourth ahead of fellow Formula 2 racer Luca Ghiotto in the Aston Martin Vantage GT3 in fifth. Dan Wells came home in sixth in his Lamborghini Huracan GT3 Evo, ahead of Scott Malvern’s Bentley, the BMW of Jody Fannin, Bentley factory ace Seb Morris and Ezequiel Perez Companc, who rounded out the top ten in his Mercedes-AMG GT3.