Leclerc is achieving what Bianchi would have – Ricciardo 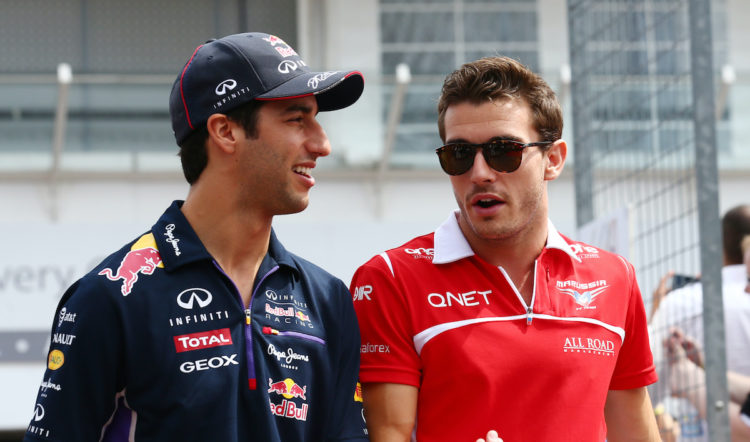 Daniel Ricciardo took to social media on Wednesday to name five of the drivers he’s raced against that he believes were ‘underrated’.

That list included Marcus Ericsson, Vitantonio Liuzzi, Roberto Merhi and even 2009 champion Jenson Button, but the one name that stood out is Jules Bianchi, who tragically passed away after crashing at the 2014 Japanese Grand Prix.

Whilst Ricciardo concedes that Bianchi was ‘underrated’, he says the Frenchman never got the opportunity to truly show off his talent because of his untimely passing, and believes he would have achieved the same as Charles Leclerc who is now a multiple race winner with Ferrari in only his second season.

“It wasn’t like Jules was underrated, but we never got to see him in a top car, so maybe people didn’t appreciate how good he was going to be,” Ricciardo wrote on Twitter.

“You think of his drive in that Marussia in Monaco in 2014, the team’s first points… Monaco is like Macau in that there’s no way to fluke a result there, it was absolutely on merit.

“As a junior through karting, Jules was the guy. We met training at Formula Medicine in Viareggio in Italy and everyone, even at that age when we were all 17, everyone treated him like he was an F1 driver already.”

Bianchi had signed a contract with Ferrari prior to his passing, which would have seen him eventually replace Kimi Raikkonen, and Ricciardo has no doubt he would have achieved success with the Scuderia.

“I got to know him and we became friends, and I quickly got to know who he was and what he’d done before I arrived in Europe. It’s another part of what makes his story so sad, because he would have been in a top team and a race-winner by now for sure.