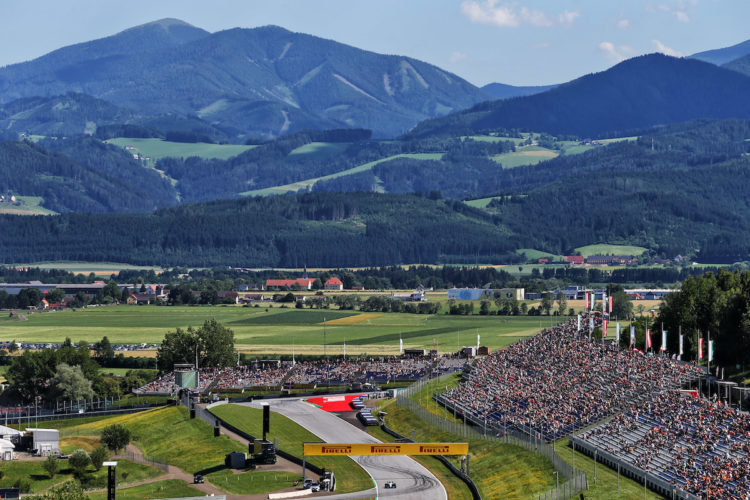 The Austrian government has said it wouldn’t stop the Austrian Grand Prix from going ahead without fans in July, though believes it will be difficult to overcome certain obstacles.

With the French GP the latest event to be postponed – although not yet officially – Austria is now the default season opener with its scheduled slot of July 5.

Austria has begun to relax its lockdown by allowing smaller shops to reopen and has plans in place to allow larger businesses to reopen from the start of May, followed by hotels and restaurants, therefore a grand prix in July doesn’t look all that unlikely.

However it must be run without fans as a ban on large gatherings is likely to remain in place for much longer and that’s something the government is open to.

“We don’t want to stand in the way,” Austrian sports minister and vice-chancellor Werner Kogler said during a press conference.

“This is a completely different situation than sports in a stadium [but] the minimum distance rules would have to be observed in the same way, of course. But that seems possible.

Kogler has been in contact with the local Styrian government and says he has also been in touch with Red Bull’s Helmut Marko as the Spielberg circuit is owned and the race funded by the energy drinks company.

“I was also in contact with Helmut Marko, who for his part plays a corresponding role at Red Bull and has acted as a mediator. I told him I would like to honour this [date], that we will forward all the applicable guidelines to the relevant motorsport associations as a service, so that they can see what is possible or not.”

But some obstacles remain which Kogler admitted would be difficult to navigate, though not impossible.

“[F1] is an international convoy in the best sense of the word. That must then be considered within the framework of the existing restrictions on entry and exit,” he explained.

“I do not want to anticipate the need for an exemption here or there. It is only in principle that this will either be linked to isolation or to health certificates, which I know are now also possible.

“In principle, I have been told by Formula 1 itself that, from its point of view, this could actually work out. Even if one or the other goes into isolation first.”

Why Austria is the best location for F1’s first race

Austria presents F1 with its best chance to get the 2020 season underway because the country has begun to relax its lockdown and that even includes allowing some events to go ahead in June – a month prior to the scheduled Grand Prix date.

The circuit is also remote, sitting in the Styrian mountains just outside of Spielberg which has a small population of just over 5,000 and is some way from a major city. The circuit also has its own airfield which would allow the necessary employees to fly in and out without coming into contact with anybody outside of the paddock.

Meanwhile Red Bull has the financial clout to make it happen as not only does it own and operate the circuit, but it pays for the race, rather than the local government, so running a race without fans wouldn’t necessarily be a major financial hit and F1 would likely compromise on its hosting fees as a result.

However, there’s still a lot standing in the way of it actually happening and what exactly would the point be if no other venue is able to host a race – a one-race season would do far more damage than good!