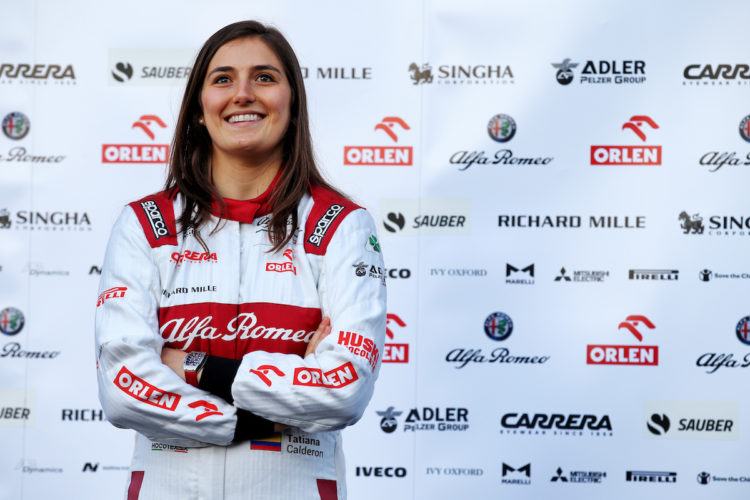 Calderon, 26, has been associated with the squad since 2017, and has undertaken a handful of demonstration runs and filming days in Formula 1 machinery.

She is set to compete in the Japan-based Super Formula category this year after moving across from Formula 2.

“I have done some simulator work for the team in the past, doing correlation work and providing the feedback to the changes developed in the simulator,” she said.

“Hopefully I can work more on it this year now that we have a new simulator at the factory in Hinwil.

“Of course, nothing fully compares to the real thing, so the hope is always to get some more mileage in an F1 car and be able to share the feedback with the engineers.”

Calderon believes her expanded role with Alfa Romeo will be of assistance in her racing career.

“When you come from the feeder series on the Formula 1 ladder, series like F3 and F2, you are used to working with a maximum of 10 people and a very strict regulation where you are allowed to change very little in the car,” she commented.

“You have no live data or access to a lot of information, so for me it has been incredible to be able to see all the work that goes behind these two cars, all the work from more than 400 people, to understand how to communicate, to pay a lot more attention to every detail.

“Formula 1 is the highest level in so many ways so it has been very beneficial in my career to be able to see this excellence so closely and to drive one of the quickest cars in history.

“Working with such a group of professionals has helped me develop as a driver in so many aspects.”